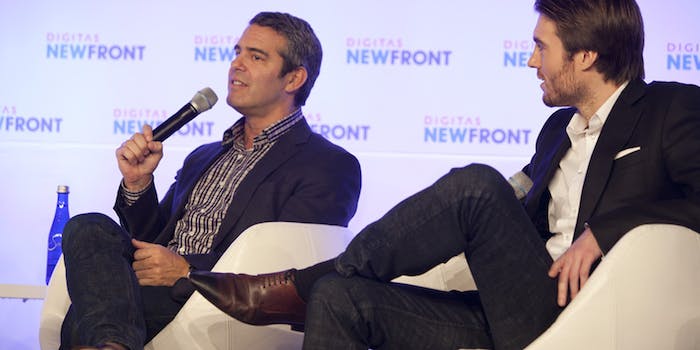 Unlike Drake, Cohen did not start from the bottom.

Thank god Bravo’s Watch What Happens Live had double the AC last night, with guest Anderson Cooper joining Andy Cohen, because things got hot and uncomfortable in the Web-only aftershow.

As part of the show’s five year anniversary celebration, Cohen had Kelly Ripa guesting alongside the CNN silver fox, with fans voting in a live poll as to who they wanted to reveal a secret about the Bravo host in the aftershow.

With a landslide win, Anderson was appointed to share a secret about his friend. But Cooper didn’t settle for a boring cop out. Rather, he busted out the heavy artilerity, professing that Cohen, unlike Drake, did not start from the bottom.

The whole thing transpires around the 3:15 mark, as Cohen encourages Anderson to go with his gut when it comes to spilling secrets.

If you’re too lazy to watch the video, here’s the glorious moment in gay history in a single beautiful GIF.