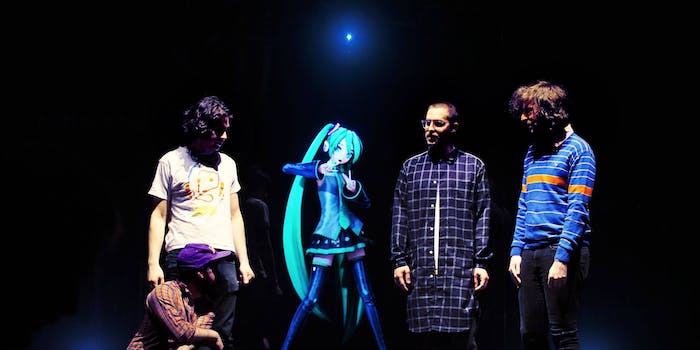 The New Yorkers who opened up for a hologram on tour

New York City-based Anamanaguchi has shared its blend of 8-bit sounds and rock at plenty of places, ranging from the EDM-centric Ultra Music Festival to The Tonight Show Starring Jimmy Fallon. The four-piece, however, was in new terrain this spring when it served as the opening act for Hatsune Miku, a digital pop star from Japan who performs live as a hologram.

“It’s a very different kind of crowd that we are used playing to,” guitarist Ary Warnaar tells the Daily Dot. “I would say even seeing in general. Miku’s fans have so much energy, and it is manifested in such a different way, compared to your usual concert.”

It was a 10-city trek that was the aqua-haired singer’s biggest outside of Japan to date. Anamanaguchi—which also features guitarist Peter Berkman, bassist James DeVito, and drummer Luke Silas—also composed an original, English-language song for her to perform live, called “Miku.” She would sing it as part of the show’s encore, which featured the very human members of Anamanaguchi flanking her onstage.

Hatsune Miku serves as an avatar for a singing-synthesizer software called Vocaloid, which allowed users to generate their own digi-vocals. Sapporo, Japan-based company Crypton Future Media created Miku as a way to boost sales of the program in 2007, and it worked beyond its wildest imagination. Her anime-style appearance caused stores to sell out of Vocaloid, and, even though other Vocaloid characters exist, she has become one of Japan’s most famous pop stars. She eventually caught international attention thanks to live, hologram-boosted performances. In recent years, she’s made similar inroads into the U.S., opening for Lady Gaga in 2014 and appearing on a particularly surreal episode of The Late Show With David Letterman.

“I think the first time I ever saw anything Miku-related was on You’re the Man Now Dog,” Berkman says, recalling that one of the meme site’s user-created pages featured a Miku song. “It was so different sounding, it had that quality of being a peek into a whole world of possibility.”

Whereas Berkman says his experience with Vocaloid initially took place entirely online, Warnaar encountered Miku’s software on a trip to Japan. “I saw her merchandise first and was like, what’s her deal?” he says.

Despite an initial curiosity they didn’t find a way to incorporate Miku into Anamanaguchi’s songs. Yet the band met representatives from Crypton Future Media last year, after playing at Los Angeles’s Anime Expo with electronic artist Porter Robinson (himself a fan of the technology). “They saw our show, and reached out to us,” Warnaar recalls.

It started as an offer to do a remix for Miku, but Anamanaguchi suggested the band write an original. It took a fair amount of brainstorming to land on an idea that all parties agreed to.

“We really wanted to throw a party for Miku after her show, playing on the idea of a large artist coming through a city and playing a crazy underground spot at 4 or 5am,” Warnaar says. That notion was scrapped and Anamanaguchi focused on writing “Miku,” a number that’s a theme song and thank-you note to fans. “It took the pop process of vocal comping to a whole new level,” Berkman says.

“It’s a collaboration, essentially. It was very much like working with a singer, but a very different process since you are working with software,” Warnaar says. “You can treat it like you’re totally alone—I have total control, I can do whatever I want—but you have to set some collaboration boundaries to make it interesting.”

The band imagined what it would be like if Miku was right in the room with them. “There were many days in the studio where I felt like I had been talking with someone all day, but I hadn’t,” Warnaar says.

“That’s a theme that has run through a lot of our work, outside of Miku, this idea of having an empathetic relationship with software,” Berkman says.

They also had to choreograph the accompanying dance Miku would perform on tour, something totally foreign to Berkman or Warnaar. Luckily the band’s drummer had moves.

“We happen to be blessed by Luke Silas, one of the best dancers in the United States,” Berkman says. “We filmed Luke in my basement, and emailed that to Crypton, and they had their dancer do it with motion tracking on. It only took three months for Luke’s dancing to turn into Miku performing in front of thousands of people.”

Performing in front of Miku’s dedicated fans ultimately left the deepest impression on the guys, from their coordinated glowstick waving (“Visually, it’s gorgeous,” Warnaar says, “I wanted to stop playing and just watch it”) to the passion present in the Miku community, down to fans driving up to the shows in cars decked out with Miku livery.

Although the virtual pop star scene remains niche in the U.S., the band says that technology such as Vocaloid and digital performers like Hatsune Miku will only grow in visibility. “It won’t be a weird thing one day, it will be a great option, it will be a great outlet,” Warnaar says. “It makes so much sense, for people to have access to something that allows them to be creative in ways we haven’t been before.”

Adds Berkman: “I think any deliberate plan to grow Miku is doomed to fail. … Vocaloid will most certainly grow, but it will be through randos speaking through her. The real power of Hatsune Miku is the involvement of the audience.”