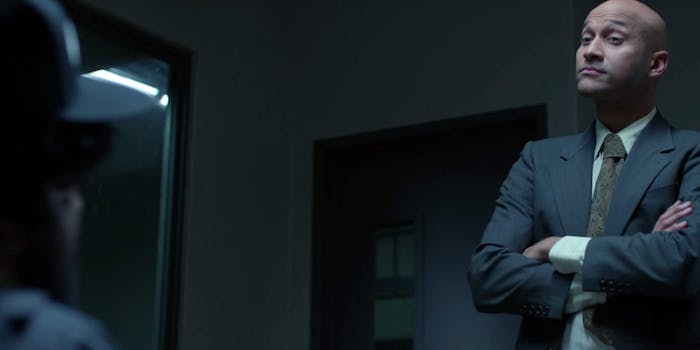 This week marked the last Key & Peele episode, ever. While comedy fanatics like myself mourn, now is an opportune time to reflect on what made the series so great. I’m aware that explaining why something is funny often sucks the comedy out of it, but the genius of Key & Peele deserves one final blow-by-blow breakdown.

Ian Roberts, showrunner and executive producer for Key & Peele, is also one of the founders of the Upright Citizens Brigade Theatre, along with Matt Besser, Amy Poehler, and Matt Walsh. Some of today’s top comedians—Ilana Glazer and Abbi Jacobson of Broad City, Aubrey Plaza, Nick Kroll, Chris Gethard, SNL’s Bobby Moynihan and Kate McKinnon to name a few—got their start at the legendary improv and sketch theater. (Full disclosure: I am a student there.)

UCB teaches that the key to a successful improv scene or sketch is having a strong game, which is what’s funny and often what’s unusual about a scene or sketch. “It is a consistent pattern of behavior that breaks from the expected pattern of our everyday lives,” the Upright Citizens Brigade’s manual states.

Most sketches on Key & Peele have a strong, clear game that is heightened throughout. In “School Bully,” Peele picks on Key like any school bully would but then immediately explains the psychology behind his bullying, all while maintaining a “tough” tone of voice. The scene has a clear game which we could call “honest bully.” There is only one unusual thing that continues to be heightened, nothing to distract the viewer from the honest bully, and the show pulls it off perfectly.

“Text Message Confusion” and “Yo Mama Has Health Problems” are two more hilarious sketches that both have strong games.

Not only are Keegan-Michael Key and Jordan Haworth Peele great comedians, but they also have insane acting chops. From Peele’s spot-on impression of President Obama—seriously, this is the best Obama impression out there—to Key’s excellent straight man from “Manly Tears.”

Peele’s performance in “Continental Breakfast” knocks it out of the park. He embodies this ridiculous character so well that the sketch surpasses just being farcical and becomes a work of absurd genius.

Key & Peele never shied away from imbuing the show with cultural commentary. Last night’s finale ended with “Negrotown,” which is arguably one of their best (and most tragic) sketches.

Their cultural commentary was deep while still being accessible— no liberal arts degree needed to understand their humor. And at the same time, they were never laughing at the marginalized—although they come close in their college football sketches, making fun of names like D’Marcus Williums, D’Squarius Green, Jr., and Ibrahim Moizoos. Most of the time, their jokes were based in mocking the oppressor and pointing out the absurdity of systemic oppression itself. “Das Negros,” where both men appear in comically bad white face, and “White Zombies” illustrate this well.

Ultimately the success of the show is rooted in Key and Peele’s excellent chemistry; you can tell the actors genuinely love each other and how much fun they’re having while shooting the show. We see this most clearly in the sketches where Key and Peele’s characters match each other, as well as in their banter on stage or in the car.

Although it’s obviously sad that the show is over, I’m excited to see where Key and Peele’s careers go—separate or together. And we can be grateful that it’s not a great show that fell victim to a decline in quality because it went on for too long.