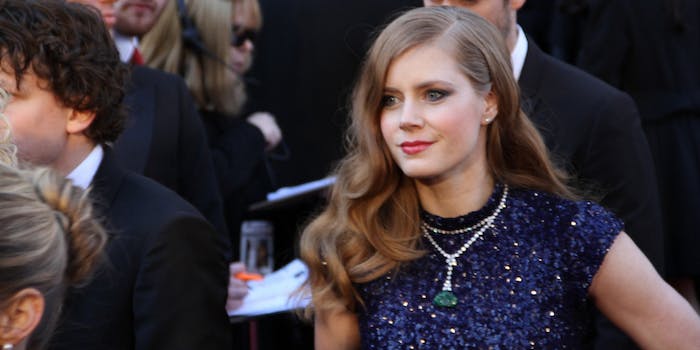 Stars—they’re just like us! Except sometimes they’re way more selfless, generous, and classy.

Stars—they’re just like us! Except sometimes they’re way more selfless, generous, and classy, not to mention gorgeous and talented. Case in point: Amy Adams, who gave up her first-class seat to a soldier on a flight.

According to a tweet from Jemele Hill, cohost of ESPN’s Numbers Never Lie:

Just saw actress Amy Adams do something incredibly classy. She gave her first class seat to an American soldier. I’m an even bigger fan now.

The actress, who was born on a military base in Italy during her father’s service days, had spoken with the soldier privately near the front of the plane on the flight from Detroit to Los Angeles. Adams, who was booked in first class, switched seats with the soldier before takeoff, giving him a chance to enjoy first class—and giving someone in coach a memorable seatmate. Hill recounted the incident via email to Today.com:

When we were waiting to board, I saw her glance the soldier’s way and then she said something to the person she was traveling with. Once we boarded, I saw she was in first class. I was upgraded to first class and she was a couple rows behind me. I think she must have said something to the flight attendant, because before we took off she had vacated her seat and the flight attendant brought the soldier to her seat.

If you needed another reason to love the five-time Oscar nominee, here it is.