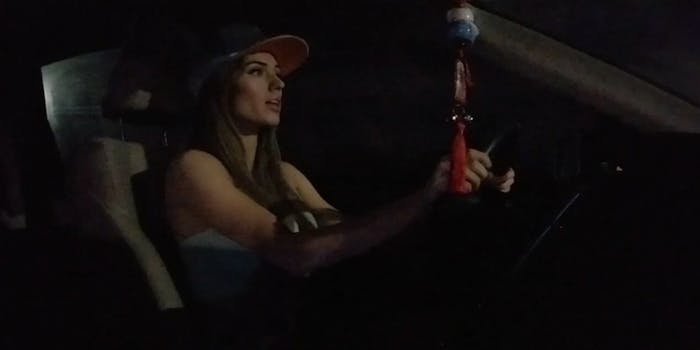 Will she get more disciplinary action from the streaming giant?

Twitch star Amouranth has been enveloped in controversy recently for flashing the camera during a stream and getting banned for it and for claiming she was being blackmailed by an Instagram moderator. Now she faces punishment from the platform for driving while streaming.

As captured by the r/LiveStreamFail subreddit, Amouranth, whose real name is Kaitlyn Siragusa, is driving and singing along to the music in her car. She occasionally glances at the camera and briefly takes her eyes off the road multiple times.

Amouranth does keep her hands at the 10-and-2 position on the steering wheel while traveling down the road.

It seems, at least in this now-deleted clip, that nothing exciting is happening, but according to Twitch, driving and streaming at the same time is not permissible.

According to the site’s Community Guidelines, driving is listed under the category of “self-destructive behavior.” The guidelines state, “Any activity that may endanger your life or lead to your physical harm is prohibited. This includes, but is not limited to: suicide threats, intentional physical trauma, illegal use of drugs, illegal or dangerous consumption of alcohol, and dangerous or distracted driving. We do not make exceptions for self destructive behavior performed as a stunt or gag made in jest, or meant to entertain, when the behavior could reasonably be expected to cause physical injury.”

For those Twitch users who were upset that Amouranth only got a three-day ban last month for flashing her camera, this apparent violation doesn’t sit well.

“It’s fasincating (sic) to watch someone blatantly not give a fuck [about Twitch’s rules] while there are others walking on eggshells for far more inane things,” wrote one redditor. “Good job Twitch. I wonder what the context will be for not banning her this time.”

As of this writing, Amouranth’s Twitch channel, which is followed by more than 1.5 million people, is still active.