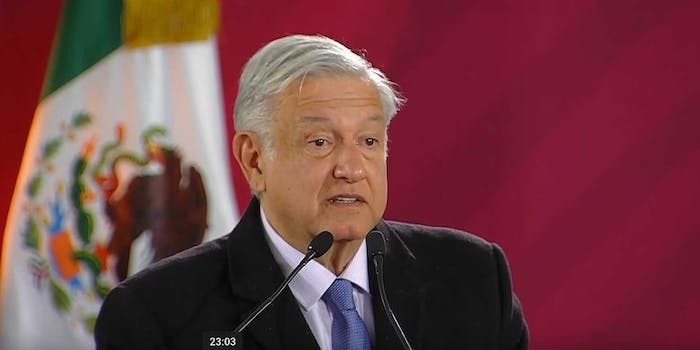 Politicians and social media—a match made in heaven.

The newly-elected Mexican president has a thing for social media. But he’s not tweeting up a storm, like President Donald Trump, or charming constituents with Instagram stories, like Rep. Alexandria Ocasio-Cortez (D-N.Y). He’s putting out YouTube videos.

Andres Manuel Lopez Obrador, more popularly known as AMLO, has more than 600,000 followers on YouTube and uses the platform to address anything from “fake news” in Mexican media to gender discrimination, according to a Bloomberg report.

Lopez Obrador was sworn into his presidency in December 2018, and has since started sharing his morning videos which, Bloomberg says, are garnering so much attention that they’re turning many Mexicans into “morning people.”

Lopez Obrador promised an about-face from the administration of Enrique Pena Nieto, saying in one of his first press conferences, “There are no barriers here. Things are different—or were they like this before?”

While some of his critics confront him about his policies, like his decision to shut down gas pipelines to avoid theft, or the abrupt shuttering of an international airport construction project, Lopez Obrador’s morning briefings—sometimes over an hour—are gaining popularity in the country. TV networks are even picking up his YouTube streams, according to the report.

Lopez Obrador’s YouTube channel itself is a testament to the videos’ popularity—though he has been on the platform since 2009, and shared videos prior to his presidency, the ones uploaded since December often show hundreds of millions of views.

According to Bloomberg, the morning briefings started when Lopez Obrador was the mayor of Mexico City from 2000 to 2005.

Lopez Obrador is not the first Mexican politician to use YouTube to get his word out. Former President Vicente Fox Quesada, a vocal and persistent critic of Lopez Obrador, often used his platform on YouTube to criticize Donald Trump.

He continues to make jabs at Lopez Obrador, recently criticizing him for his tepid response to Trump’s threat to close the U.S.-Mexico border.

“Way to defend Mexico and Mexicans!!!” the former president tweeted in Spanish in December.