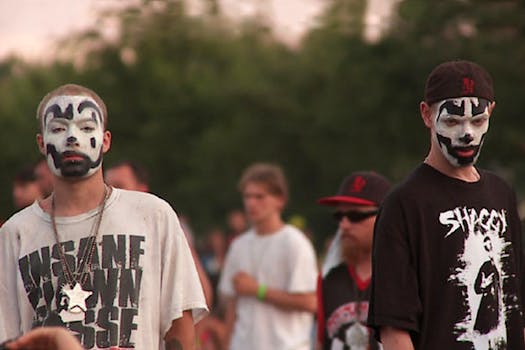 Sean Dunne knew that the public didn't quite understand the Insane Clown Posse. So he made a movie to show who they really are.

When a new documentary, American Juggalo, made its debut on Reddit today, nobody thought twice about putting its subjects down.

With dreadlocks and cornrows, profane and violent language, white-trash attire and a penchant for getting drunk and high and setting things on fire, Juggalos don’t lend themselves to good first impressions. The twenty minute NSFW documentary is a rare instance where the group is allowed to speak for itself:

Director Sean Dunne told the Daily Dot he came to the Gathering of the Juggalos, a yearly Insane Clown Posse music event to sate his curiosity about the group.

“If you went to high school in the past 20 years, you probably met one to two of these people and they didn’t seem to be the most well adjusted. But they get together (at the Gathering) and it’s one big family for them,” he said.

“I interviewed 150 Juggalos and every single one of them said they came for the family,” he said.

“Fuckin’ magnets, how do they work?” became an Internet catchphrase, prompting a slew of Juggalo parodies.

Dunne said he decided to make a Juggalo documentary after the group hit the mainstream. He could tell, he told us, that Juggalos weren’t who the media was making them out to be. In four days of interviews, he discovered that Juggalos are “people from all walks of life.”

One of Dunne’s interviewee’s echoes his belief. A young woman stands in front of an RV, as Dunne’s camera looks up at her.

“[Juggalos are] kind people that people look down upon because they listen to weird shit. they didn’t like their music or their appearance so they turned them away,” she said. “That’s how I became a juggalette, through family love.”

Although Dunne said his film simply attempts to portray Juggalos in a neutral light, he’s been fully taken in by the Juggalo community. Tonight, after an interview with the Village Voice, he’s going on WFuckOffRadio, a Juggalo news podcast. Like at the Gathering, he predicts the podcast will address him as a fellow Juggalo.

“[My crew and I] don’t talk, eat or dress like them, but the Juggalos say it’s about more than that. They said it’s about an attitude, and they thought we had it,” he said.

“Like it or not, I’m part of the family now. Their documentarian.”