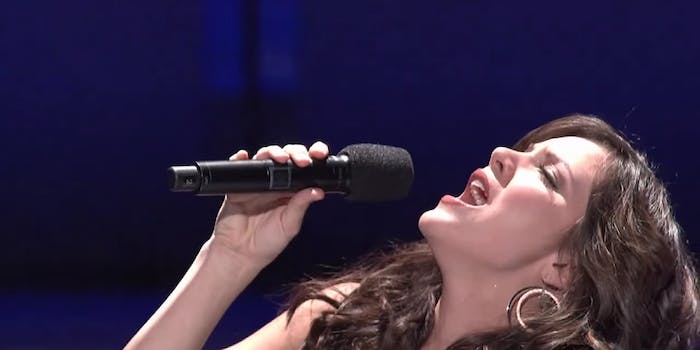 43 of the best and worst ‘American Idol’ moments

'American Idol' is slated to end after 15 seasons. Here's a quick look at some of the show's most memorable moments.

American Idol, that TV show that arguably paved the way for singing competitions to take over a large chunk of the industry’s love for reality television, has been renewed for its 15th season.

The real news, however, is that Fox—the network that has had Idol as one of its flagship shows since it debuted in 2002—is finally pulling the plug.

Just announced! @AmericanIdol will begin its 15th – and FINAL – season this JAN on @FOXTV​! http://t.co/DLJmi9U3Ff pic.twitter.com/KQffQPjMvn

yes next year will be our final season of @AmericanIdol :( this show's been a big part of my life for so long… hard to imagine it w/out it

The official announcement came two days before the current season’s scheduled finale, perhaps in a move to boost the show’s ratings, which have been reportedly ailing the past few years.

News of Idol’s upcoming farewell season also became a trending topic on Twitter. While majority of the comments express relief that the show is finally being put out of its misery, Idol has also garnered quite a steady following of fans who have never missed an episode, and they are devastated.

If you’re a part of the latter group—or a member of the former who’d love to remember what the hype was all about in the first place—here’s a roundup of our favorite Idol moments through the years.

Of course it’s hard to forget the show’s first successful winner. In order to fully encapsulate her journey, you need to watch both her audition (featuring a 27-year-old Ryan Seacrest) as well as her finale performance on the Idol stage.

Fans who were on the Idol bandwagon early enough to see Clay Aiken take on Ruben Studdard in the finale might remember this particularly cheesy performance:

Although Studdard ended up winning that season, Aiken’s rendition of “Bridge Over Troubled Water” is still considered one of the show’s best performances to date.

The season when the fantastic Fantasia Barrino took home the idol crown. She truly deserved it, if only for her soulful rendition of “Summertime” while on the floor.

If you don’t quite remember this season or that particular moment, then maybe the audition clip of one William Hung might jog your memory.

This was the season that had two rockers do awesomely on the show. The first one is Constantine Maroulis, who did Queen justice with this rendition of “Bohemian Rhapsody.”

The other one is Bo Bice, who actually went as far as top two that season. His a cappella rendition (which is probably the first time a contestant of the show opted out of having music accompaniment) of “In a Dream” stunned the Idol audience and is regarded as one of the show’s greatest performances.

The title for season 4, however, went to Carrie Underwood.

Fans of the show will always remember this season as the one where Chris Daughtry kept singing one hit after another and quickly became a front-runner.

We also remember the moment Daughtry, the obvious crowd favorite, got eliminated from the show he so clearly dominated.

But that’s OK. Katharine McPhee’s stellar performance of “Over the Rainbow” sort of makes up for ousting Daughtry.

Our favorite audition of the season has to go to Sherman Pore, who came on just to sing a song for his lady love.

Favorite contestant to hate? Definitely Sanjaya Malakar, whose version of “You Really Got Me” got a girl crying (literally). But him singing “Bathwater” while sporting an awkward mohawk was definitely a lot harder to bear.

Thank goodness Jordin Sparks ended the season with a win and an emotional performance of “This Is My Now,” a song that got chosen through Idol‘s first-ever songwriting contest and which later on became her first official single.

There’s a terrible audition to be watched almost every season, but this one by Renaldo Lapuz is especially atrocious. You can’t look away, though.

It’s a good thing we had great singers that year to actually gush over, namely David Cook and David Archuleta.

The two Davids actually went on to be the season’s final contestants. This was the first season to ever have a top two that had never been in the bottom two or three prior to the finale. They were that good.

Cook eventually won, but rather than witness the winning moment, here’s a video you need to see of a couple of Archuleta diehards reacting to the loss.

It’s hard to not have a special place in your Idol-loving heart for Scott MacIntrye, the first visually impaired finalist on the show.

It’s also hard not to fall in love with Kris Allen, the season’s winner.

In our opinion, however, season 8’s biggest moment was when finalist Adam Lambert sang “Mad World.”

Apart from being known as the one season when Ellen DeGeneres was a judge, it was also the season of the Bikini Girl.

As incredible as it was to see judge Kara DioGuardi demonstrate singing and get dissed by a contestant, some of the season’s highlights include a performance by Andrew Garcia, whose rendition of former Idol judge Paula Abdul’s “Straight Up” blew minds.

Another one is “Me and Bobby McGee,” sang by Crystal Bowersox, who went on to be one of that season’s top two finalists.

Audition weeks are definitely the best part of Idol. It was the first time we ever met Scotty “Baby Lock ’Em Doors” McCreery.

He actually went on to win that season.

It re-introduced us to the incredibly talented (and former auditioner) Haley Reinhart.

How she was skipped over the previous season is beyond us.

And who can forget the wonderful surprise that was Casey Abrams?

His quirky antics and awesome singing style paved the way to his dream match-up with Jack Black.

Season 11… aka the season that gave us the gift of Phillip Phillips. I mean, his winning song “Home” was literally everywhere the year he won. And for good reason.

In our opinion, however, finalist Jessica Sanchez also gave performances so amazing, we wouldn’t have minded if she won as well.

This season was all about girl power.

It was the first time all male contestants were eliminated before the females, ensuring that the winner would be a woman after five years of male dominance. It was also the first time the judge’s save wasn’t used, since its introduction in season 8.

It was the season where female judges actively hated on each other.

It was the season crowd favorite JDA channeled Adele in the most spectacular fashion.

In the end, Candice Glover won. Her rendition of “Lovesong” is haunting and unbelievably good.

This season was the first one Harry Connick Jr. appeared in as a judge, and we love him. He may have saved the show. How? Through awesome and spot-on critiques and lovable moments like this.

This season, we also got top two finalists who knew what it meant to rock out. Jena Irene definitely brought us to life with her performance:

But it was Caleb Johnson who took home the final prize. Aerosmith’s “Dream On” is not an easy feat to undertake, and the fact that he hit the killer note effortlessly made him a deserving winner.

Finally, we’ve made it to the current season. We’ve seen a lot of memorable auditions, namely ones by Jax and Clark Beckham, both of which are (spoiler alert) still in this week’s finale, along with finalist Nick Fradiani.

Other notable moments include the first time we ever heard kooky Joey Cook sing.

But the most exciting moment we’ve ever had prior to the finale that had everybody nervous is this awkward interaction between Harry Connick Jr. and Quentin Alexander.