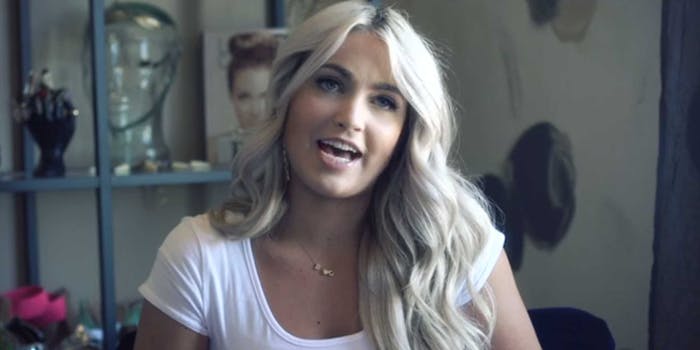 Casey Wiegand started blogging after having a miscarriage in 2011. Her blog, The Wiegands (the other Wiegands are her husband, Christopher Wiegand, a filmmaker, and their three children) has created a passionate following. It’s embraced as a mainstay of the “mommy blogger” genre, though as previously mentioned, also dives into some heavier emotional territory. One thing is certain: It’s a very popular site. Her husband, inspired by Casey’s blogging and the community she’d created, decided to produce a documentary about the blog, as well the entire blogging culture and industry.

“We were at the mall and people came up to us and recognized me like, ‘Oh, you’re Chris. I read your wife’s blog.’ That got me thinking,” Christopher tells me. “Not in a narcissistic way. Just more like, there is a lot of power here, a lot of influence. It’s a huge responsibility.”

“I want to validate these bloggers,” he says. “It’s really cool and can have a huge impact on society.”

Christopher interviewed 51 of Casey’s closest blogger-friends over the course of a two-month road trip he took last summer. The idea was to explore and explain what is a very diverse, all-encompassing movement.


The trailer alternates between interviews with bloggers and Tererence Malik-esque landscapes, because nothing says “blogging”—but also “America”—like the Grand Canyon and wheat fields. While the trailer can put you in something of a trance, you might notice there’s a certain consistency to its subjects: It just so happens that all of the bloggers—those featured in the trailer, at least—are remarkably well-dressed and attractive white women (with one minority being the exception) who ask themselves questions like “What is a blog?” and say things like, “I think the human experience in general is interesting to people.”

“I imagine that a lot of these girls will send this movie to their dads, like ‘Hey dad, you wonder what I do, you never really understand what I do, or why I love doing it but watch this movie, you’re gonna see by the end of the movie why I love blogging,'” Wiegand speculates. “I kinda wanted it to be a mouthpiece for them.

Wiegand gets defensive when I bring up the overwhelming whiteness of it all.

“I wasn’t sure if anybody would try to question my motives on picking people or something. I filmed the women who said yes. It’s not intentional if it’s heavy one way or another,” he says. “I would hope that nobody would ever look at that and make some political argument out of it.”

“I hope that’s not what people think about… I’m a documentarian. I see myself as a journalist. I can’t force something that’s not there,” Wiegand explains. “I just film what is presented to me.”

At one point the trailer’s voiceover intones, “Follow along as he [Christopher] travels the United States, interviewing a range of bloggers.” At 1:48, in a stroke of editing genius, Christopher sits down with the only woman-of-color in the whole thing, literally as the narration hits the words “a range of bloggers.”

“I’m not the kind of person who’s going to slot someone in there just because I don’t want to be accused of something. I’m not going to throw in a…” he pauses, “random person just to be able to check it off my list.”

None of this means Christoper Weigard is racist; he spent a summer interviewing his wife’s bogger friends and colleagues, which could very well be mostly white. But to call a documentary about a specific demographic American Blogger is missleading.

“I’m an artist, so I’m gonna make it the way I feel like, the way I want to make it and not because I want to appeal to anybody… I don’t know if there is something inherently about people who have blogs,” he says, trailing off. “You’d be able to say the same thing about every Hollywood movie.”