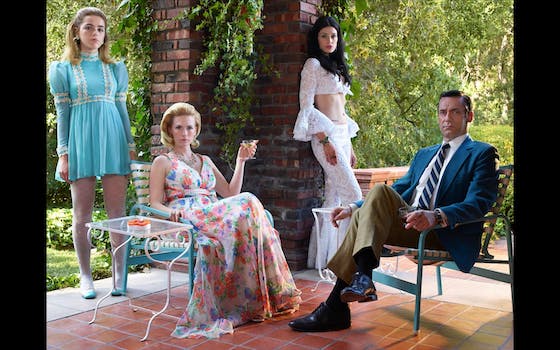 Personalize an episode of ‘Mad Men’ with your Facebook photos

AMC teams up with Facebook for a promotion celebrating the season 1 finale.

It took AMC’s Mad Men a mere 12 episodes to evolve from interesting new period drama to one worthy of awards and accolades.

Even casual Mad Men fans point to “The Wheel” as the best of the series’ 85 episodes, the one which first revealed the softer side of Don Draper’s complex persona. To commemorate the past and tease the upcoming final season of the show on April 5, AMC has teamed up with Facebook to present an app that personalizes the key scene in that memorable episode.

Embroiled in a deep family crisis, Draper is pitching a new concept to the management team of Kodak. In a dramatic moment of historical fiction, the ad man uses the slide projector armed with a wheel that moves slides along, to depict the meaning of sentiment. The kicker is Draper’s metaphoric name for the slide accessory—the Carousel. Overcome with emotion, those at the table become teary-eyed, and a weeping Harry Crane (Rich Sommer) runs from the room.

To update and add some magic to the season 1 scene, Facebook combs through a user’s photo library and replaces the pictures from the original show with four selected personal images that dot the 45 seconds of the video app.

Much like for its end-of-year video collage, Facebook’s algorithm that selects the photos appears to be based on pure randomness, rather than specific images that might carry some meaning. In the case of its Mad Men promotion, users can expect a mix of truly heartwarming pics with a few oddballs tossed in. Yes, that great piece of peach cobbler I ate four years ago sure looks good against Don Draper’s soliloquy.