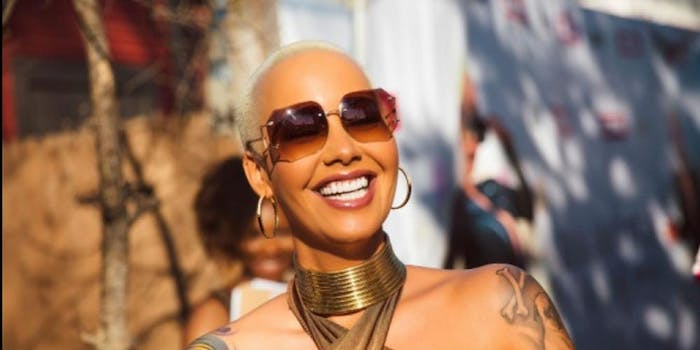 Want Amber Rose to be your ‘alter ego’ online? There’s an app for that

The Muva is the message.

Amber Rose knows how to make an entrance.

On Sunday afternoon, she exited a black SUV and slowly walked onto the patio of Lucille, a bar on Rainey Street in Austin, Texas. The late afternoon sun reflected off her thick gold necklace as fans, many of them wearing cardboard Amber Rose masks, shouted her name and snapped photos. She eventually made her way to the red carpet, where she fielded some questions. She took innumerable selfies with fans: “Rosebuds,” as they’ve dubbed themselves.

Rose took that further last year, when she headed the L.A. SlutWalk in October. She’s tried to rebrand the words “slut” and “thot” with T-shirts in her clothing line. Rose’s book, which she was promoting along with the Zoobe character, is called How to Be a Bad Bitch, and she defines “bad bitch” in part as “a self-respecting, strong female who has everything together.” It’s clear she’s attempting to rewrite certain language that’s been used to suppress women, but she’s also making it part of her brand: one that has now expanded to tech.

She says the Amber Rose-branded SlutWalk will be expanding to other cities in the future, though nothing is “set in stone” just yet. SlutWalk and her Zoobe character might seem at odds in tone, but in essence, it’s all just messaging.

“I’m glad that I did it,” she said. “I dealt with a lot of scrutiny, people not understanding what a SlutWalk was, insinuating that I was promoting prostitution and promiscuity. Just negative things. It’s really about rape victims, sexual assault victims. I’ve gotten sexually assaulted on numerous occasions, and slut-shamed every day on the Internet. It’s really just all the issues we deal with as women, to come out and talk about it and help other women. Let that part of their life go and move on and be positive.”