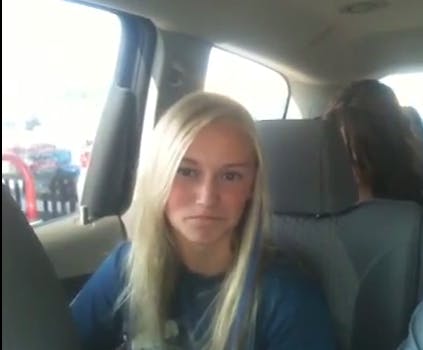 How do you pronounce "bullshit" backwards?

Friends say that Alyssa can pronounce any common word backwards within three seconds of hearing it. But is it possible that they’re just giving her the benefit of the doubt?

Living in relative obscurity since its posting on July 10, 2011, the Youtube video “Alyssa talking backwards. Poteau Oklahoma” went viral last night, landing on the front page of Reddit and picking up a significant chunk of its 221,697 views in the past 13 hours.

In the three-minute-long video, the girl sits in a van at a gas station as her sister and friends grill her on various words and terms, all of which she quickly spits back in what they claim to be perfect reverse fashion.

“Chevrolet.” “Fireworks.” “Savings.” “Gallon.” The words arrive in quick succession as Alyssa, sitting in a window seat in the van’s middle row, turns each around and says it back. “Telorcehc.” “Skrowerif.” “SgnivaS.” “Nollag.”

All of her friends looked shocked, seemingly dumbfounded and actually sort of frustrated they can’t stump Alyssa. At one point, her sister pleads with the rest of the car to try their hand.

But listen closely to Alyssa’s reverse pronunciation of “Antarctica” at the 2:57 mark, and you’ll notice that there’s something missing: two As on each end of the word. Similar discrepancies occur at 1:15, where “Wichita” is read back closer to “Awatixa”; 1:43, where “Mayonnaise” is missing the “e” at the beginning; and :27, where “Bugles” is read back as though the original word is “Bugels.”

Alyssa’s accuracy has been a popular talking point on Reddit and in YouTube comments, where requests have been made (“Racecar!” joked K1kyu) and theories have been explained:

“She is just taking the syllable sounds of the word spoken correctly and reversing the order!” wrote user L188188. Like ‘PEPSI’, she said ‘ISPEP’. Now Pepsi when said correctly does not end with a short ‘I’ sound, it ends with an ‘ee’ sound. Get it now???”

Some have even gone back to the drawing board, making their own videos in an attempt to figure out whether or not what Alyssa says is actually the word spoken backwards properly. lalajajababa’s video “Video 4 Reversed” seems to work; you can make out “go fuck yourself” at the five-second mark. OwlaFr’s video, which flips the portions of Alyssa’s video where she’s talking, lines up in places, though the tape is skittish enough that one could reasonably question its authenticity.

Reddit user GirlsSmellGood may have posted the most thought provoking comment last night when he wrote about he and his mother’s experience working with MIT linguist Steven Pinker in 1992.

He ran us through a bunch of tests and we were mentioned in one of his textbooks. From the time i could read, i could read backwards. When my mother and i do it, its the actual pronunciation backwards not just a backwards reading of the word. For example, the word “safe” is pronounced like the word “face” when said backwards because of the long A sound, not like “ehfas” which is how it would sound it you were just reading it backwards and not actually pronouncing it. And yes, it does sound legit when played backwards on a recording. The strangest thing though, is that, when you speak, you are exhaling so when you speak backwards into a recording device and then play it backwards it sounds like your speaking while inhaling. It kinda sounds like what you’d expect some demon in a movie to sound like. Its simply known as “fluent backwards talking.” Not the coolest name, but its not exactly a useful skill.

So who do you believe? Let us know in the comments.