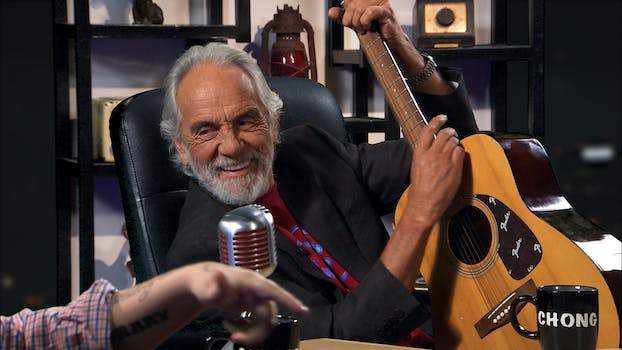 Tommy Chong wants to be the next Jon Stewart… on weed

Tommy Chong is ready to stir the pot of late-night TV.

Tommy Chong is ready to stir the pot of late-night TV.

The 77-year-old comedian and marijuana enthusiast best known for his role in comedy duo Cheech and Chong (with Cheech Marin) will premiere Almost Legal With Tommy Chong just as the late-night TV shuffle has finally settled down, fulfilling that “talk show for stoners” demographic lacking in the current lineup. The first 10 episodes, which have already been filmed, will includes sketches, interviews, musical acts, and, of course, lots of talk of weed and the state of politics.

For Chong, this show couldn’t have come at a better time. Marijuana is currently legal in some form in 23 states and Washington, D.C. (Oregon, Washington, Alaska, and Colorado allow recreational use), and it’s likely that number will grow in the next year or two. It’s come up in both the Republican and Democratic presidential debates, and the majority of Americans support legalization. And the Liberals, Canada’s new majority political party, has promised to legalize it.

But Chong has a more personal reason for doing Almost Legal. He revealed that he had rectal cancer in June—his second time battling the disease—and his son Paris pitched the show to him as something to do since he’s now unable to travel and perform while he’s seeking treatment.

We recently chatted with Chong about Almost Legal, weed politics, the pressure to go viral, and what makes him different from Jon Stewart.

Tell me more about Almost Legal With Tommy Chong.

Well, we’ve done about 10 episodes, and it looks really good. Everybody’s very excited about it, and I’m talking to people that are very popular on social media—we’re kind of going that route—and along with old buddies of mine like George Lopez and Eli Roth. So it’s a fun thing.

You know, I’m fighting cancer right now so I can’t travel and I can’t really do my usual job, so we came up with this talk show, which was a lot easier to do in my condition. And actually it helped my condition, because instead of lying around worrying about being sick, I’m standing up and entertaining people. That is medicine in and of itself.

How have you been feeling lately?

Right now I’m in healing mode. You’ve got to heal a month after radiation before they do the operation, and I’m getting close to the operation time. [Editor’s note: Chong underwent surgery Oct. 22.] But it’s going good. I’m using marijuana, I’m using the hash oil, and I’m using all of the conventional radiation and chemo. I’m attacking it from all fronts.

I tweeted something funny I said. The GOP, Republicans and I, have one thing in common: we’re both having trouble with assholes. Mine is a tumor and theirs is Donald Trump. It cracked me up.

I have something in common with the GOP. We both are troubled with assholes. I have a tumor and they have Trump.

But see, that’s one of the things about treating your sickness with marijuana, because you’re not only getting rid of the pain but you get all these creative ideas that come to you when you’re high. That’s where the talk show came out of. I was getting high so much to get rid of the pain and then I ended up with this talk show idea, and it’s working good.

Are the 10 episodes you already shot all you have planned for now, or are you planning to do more?

Well no. [We did] 10 in the last couple of weeks and what we’re gonna do is, we have a sizzle reel and we’re gonna shop it around to see where the interest lies, but no, we intend to do many, many, many more episodes.

You’re pretty political on Twitter. How much of that will factor into the show?

Oh yeah. You can’t get away from politics in America, no matter what you do. So oh yeah. Politics is the big thing in America. And with me, it’s like being vindicated because as pot gets legal everywhere, I become more and more mainstream and the go-to guy because I was the guy who’s been promoting pot for my life. Forty, 50 years, and now I’m starting to reap the benefits.

Four states currently have it legalized recreationally (and more have medical marijuana legalized), others are putting it to a vote within the next year or two, and it’s been a hot topic in the recent presidential debates. Do you think it’ll be legal everywhere in the U.S. in the foreseeable future?

Totally. And it’s probably an election year. When California votes [marijuana] legal, everybody’s gonna jump on board, including the rest of the world because America and the DEA have hijacked the rest of the world by creating a drug that is a medicine. By making it illegal, it opened the doors of all the prisons all over the world to persecute people for something that’s not a crime.

It’s pure racism. When racism disappears like it has with gay marriage and gay rights, then that’s what’s gonna happen with marijuana. Because we fall under the same misguided, racist attitude that people, the Republican Party—especially [Chris] Christie and [Carly] Fiorina, they still have that thinking—that the War on Drugs is to keep America safe. And the way they keep America safe is to kill black people for no reason and to demonize and put brown people in jail for taking medicine, basically. Because marijuana is medicine, no matter how you do it.

And that time is ending. We’re coming into an age where you are going to have a hard time remembering what it was like when marijuana was illegal because it’s going to be so normal, so common, everywhere, that all these stupid laws that they have, racist laws, will disappear. And I think that’s part of the rehabilitation of everybody in the whole world. If you take away that threat of going to jail for being high, you take that away, and you have a happy population.

You called yourself “a stoner’s version of Jon Stewart” in one of the press releases for the show.

I was such a Jon Stewart fan, and when he closed his show I realized, “Oh, I’m sort of getting into that business now.” Of course, not on a Jon Stewart level but definitely on a same mindset. … The great thing about [The Daily Show] is that they called hypocrisy every time—in fact, they made a living off hypocrisy. I had almost done the same thing. My approach will be a little [less] bombastic, a little under. Because, the way I am, I like everybody.

That’s the one thing about pot. You don’t get a lot of enemies because you love everybody, and that’s what my show is about too. Like, we had—you know the guy who outed Bill Cosby?

Of course, the first thing I did, I went right for the Cosby story. Well it turns out Hannibal really didn’t want to go there. So rather than do a Howard Stern on him I said, “OK,” and so we changed the subject and we just went on. Now I have both episodes in the can, so if we chose to show some of it or all of it we can. But I’m more ready to accommodate my guest as opposed to catch them in off-guard moments. That’s not my approach, and I think my approach now is gonna be more welcome. 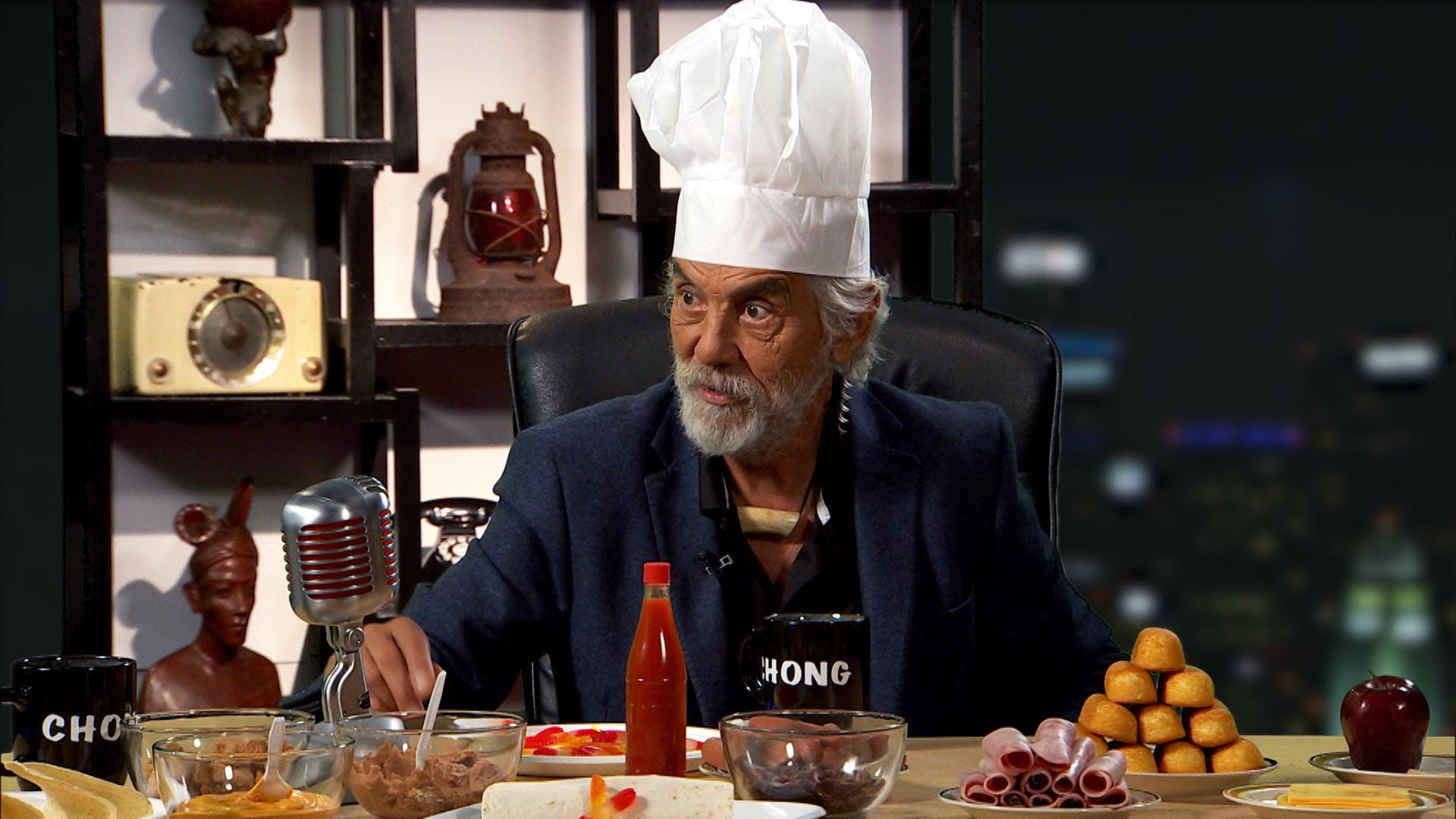 The atmosphere of late-night TV isn’t just about having a good show anymore. It’s also about going viral on YouTube; Jimmy Fallon has variety sketches and Jimmy Kimmel does pranks. How are you looking to tackle that?

The great thing about the Internet is that everything’s on the table. Everything’s viable. But we’re doing our best to stay—I was gonna say coherent—to stay current so we’re not doing old things, you know?

When I was on Dancing With the Stars, the one thing I took away from that show is I became another person. I went into the show as Tommy Chong of Cheech and Chong, and I came out of the show as Tommy Chong, the oldest dancer to make it that far on their show. And that really is now the persona I’m comfortable with. Because the old stoner guy, he’s still on the screen with Up in Smoke and Still Smoking and all of the Cheech and Chong movies we did. That guy will always be there.

But this guy that’s doing the talk show; he’s the senior citizen now, and I’m enjoying it. I’m enjoying the present because I’ve always preached that. If you want to be happy, you’ve got to live in the present.