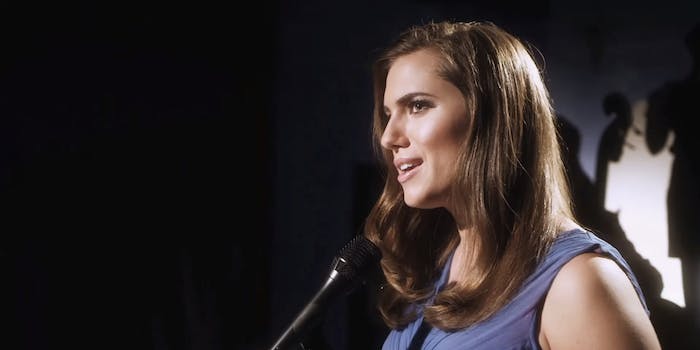 Can Allison Williams pull off being Peter Pan?

We now know what Allison Williams will look like as Peter Pan, but how will she sound?

We’ve now officially seen Girls star Allison Williams as Peter Pan, and “boy” does she look the part. But how will she sound? You can find out tonight in the livestream premiere of a movie musical she co-starred in—four years ago.

Williams posted this photo on Instagram Wednesday morning of her official Peter Pan ensemble, complete with spandex shorts, brown boots, and the famous short ’do. Williams said she actually wanted to cut her hair for the part, but costumers insisted she strap on a wig instead.

Williams has been busy getting ready for the Dec. 4 premiere, including taking flying lessons. But it hasn’t been an easy ride for the actress. Ever since it was announced that Williams would helm NBC’s latest live TV musical, there’s been doubt whether she could step into the fairy-dusted shoes graced by the likes of Cathy Rigby and Mary Martin.

The biggest concern surrounding Williams, other than the accusations of nepotism over her recent stardom, is about her singing voice. Her few vocal trills as Marnie on Girls were sweet but average, definitely not enough to carry a live TV musical. Williams has said that it was intentional on her part, because she didn’t think the character of Marnie would make sense as a talented singer.

But Williams has had some other opportunities to let her vocals shine, including a full-length movie that debuts tonight. It’s the premiere of musician Kurt Hugo Schneider’s movie musical College Musical, which Williams co-starred in four years ago. It livestreams at 8pm PT on YouTube and will also be available on iTunes.

Schneider performed piano for a 2010 video that got Williams some notoriety, when she took rapper’s delight “Tik Tok” and turned it into a lounge ballad, à la Richard Cheese. That same year, she also sang in a live recording that combined the Mad Men theme song with Nature Boy, a song made famous by Nat King Cole and movie musical Moulin Rouge.

In many of these YouTube videos, which were made well before her HBO debut, Williams’ voice carried a soft strength that could be a good match for the Boy Who Won’t Grow Up. She may not be the powerhouse that Peter Pan veterans like Sandy Duncan were, but she could have a better chance at success than Underwood did.

And for those who can’t wait until Dec. 4 to find out how Williams will do in a movie musical, there’s always College Musical.