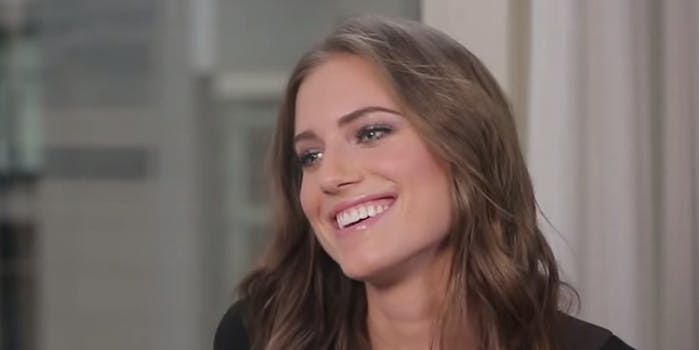 Allison Williams of ‘Girls’ will play Peter Pan on NBC

Are you having a good morning? Well, good for you. That’s all gonna change.

Are you having a good morning? Commute to work went smoothly? Boss said you looked nice today, and you’re generally in a good mood? Well, good for you. That’s all gonna change in about three to five seconds, when you find out that Allison Williams, a.k.a. Marnie on Girls, has been cast as Peter Pan in NBC’s musical production of Peter Pan.

Didn’t catch that? Let’s try this again: Allison Williams, an actress who is primarily known for being A) Brian Williams’s daughter, and B) the prettiest, least interesting, and best-eyebrowed cast member of Girls, has been cast as Peter Pan in NBC’s musical adaptation of Peter Pan. She’ll be playing the role alongside Christopher Walken, who’s been cast as Captain Hook.

“We couldn’t be happier that Allison Williams is our Peter Pan,” said NBC chief Robert Greenblatt. “She’s a lovely rising star on the award-winning show Girls—where she occasionally shows off her incredible vocal talent—and we think she will bring the perfect blend of ‘boyish’ vulnerability and bravado to save the day against Christopher Walken’s powerful Captain Hook.”

Naturally, the Internet is not happy that Williams, who along with her Girls castmates has been frequently accused of being the beneficiary of nepotism, has been cast in of the most famous theater roles of all time, a role that was famously originated on Broadway by musical theater legend Mary Martin.

“Who?” – Mary Martin FROM HER GRAVE

NBC casts Allison Williams as Peter Pan. Maybe they can find a guest role for Brian?

It’s not that Allison Williams can’t sing, as she’s demonstrated on various episodes of Girls. (Not to mention in a series of nauseating musical theater covers she shot while she was in college, which are all available to watch/cringe at on YouTube). It’s that her flinty, weak soprano is totally inappropriate for the role of Peter Pan, which requires a big, booming voice and presence.

It’ll be interesting to see whether her turn as Peter Pan will be as poorly received as Carrie Underwood’s portrayal of Maria—a role also originated by Mary Martin—in last year’s The Sound of Music Live!, but I think I speak for most of us musical-theater lovers when I say the following: