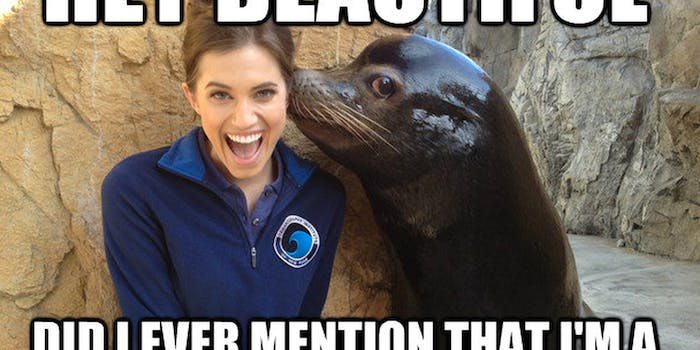 Marnie Michaels wouldn't be pleased to see a new meme based off her—but Allison Williams doesn’t look too annoyed.

For being a self-described uptight girl, Marnie Michaels wouldn’t be pleased to see a new meme based off her—but Allison Williams doesn’t look too annoyed.

Reddit got its hands on a picture of the HBO Girls starlet posing next to a sea lion as it leans into her, nuzzling her ever-so-gently, appearing to share a secret with Williams, or maybe recommending she get back together with Charlie. I don’t speak the language, so who knows.

Anyway, the meme is dubbed “Dirty Secret,” and it sprouted from a thread featuring the picture that landed on Reddit’s front page Thursday. It took awhile for Redditors to figure out who that “fucking gorgeous” woman was (Girls isn’t aimed at Reddit’s demographic, I guess), but that didn’t stop them from clobbering it with filthy captions. Pictures of the meme flopped its way onto Betabeat, Uproxx, and meme manufacturer Quickmeme.

Don’t say we didn’t warn you of the incoming onslaught of beastiality and “clubbing” jabs, but there are plenty of Seal jokes to keep your mind saltwater-fresh. Roar.