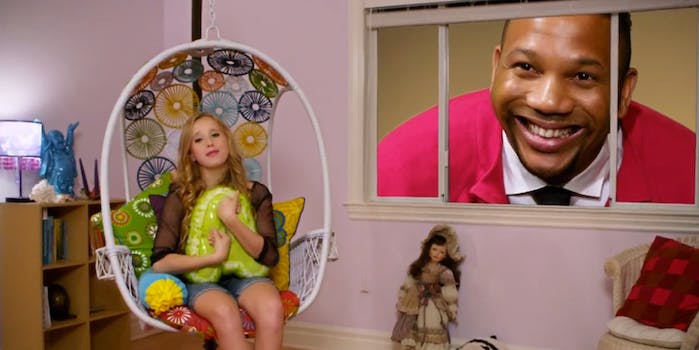 From the people who ruined Chinese food, Friday, and Thanksgiving, here’s a song about the alphabet.

Alison Gold’s “Chinese Food,” the latest tween pablum from the studio behind Rebecca Black’s “Friday” and Nicole Westbrook’s “It’s Thanksgiving,” left us with a lot of questions. Why is this so bad? Why is this so full of quasi-racist stereotypes? And—dear God—what would come next?

Why not the alphabet? Gold and producer Patrice Wilson are back with “ABCDEFG,” the completely unnecessary prequel to “Chinese Food.” This time, Gold is stuck with nothing but the ABCs (at least up to the letter P), but the four letters that she wants (L-O-V-E) are nowhere to be found.

Why? She has a crush on a boy, and he doesn’t feel the same way.

Then things get really, really weird.

Wilson, the Mr. Rogers–esque puppetmaster running a neighborhood of tween singers, doesn’t want to see Gold sad. He tries to help the best way he can: by luring the 11-year-old into a club, where he uses a Cupid stand-in and “potions” to make Gold’s crush return her feelings—i.e., he puts a drug in Gold’s drink.

Oh yeah, and there’s a final twist that leads even the background characters to cringe.