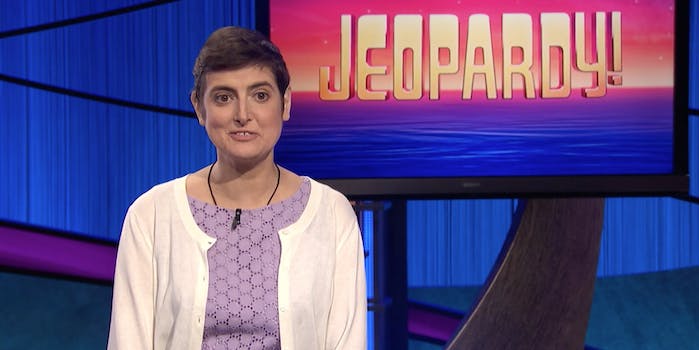 ‘Jeopardy!’ honors contestant who died of cancer after her winning streak ended

She donated her more than $100,000 in winnings toward cancer research.

Alex Trebek and Jeopardy! paid tribute to Cindy Stowell, the contestant who died from cancer shortly before her appearance aired on TV, after her six-game winning streak came to an end.

Jeopardy! episodes are usually taped months in advance but Trebek taped a special appearance to address the audience about Stowell’s death, which occurred on Dec. 5—eight days before her run on the show began.

“For the past six Jeopardy! programs, you folks have been getting to know the talented champion, Cindy Stowell,” Trebek said in a clip that aired after the episode on Wednesday. “Appearing on our show was the fulfillment of a lifelong ambition for that lady. What you did not know is that when we taped these programs with her a few weeks ago, she was suffering from Stage IV cancer, and sadly, on Dec. 5, Cindy Stowell passed away. So from all of us here at Jeopardy!, our sincere condolences to her family and her friends.”

Stowell, a science content developer from Austin, Texas, passed the initial online test earlier this year, and after receiving her invitation to the next round of interviews, she reached out to Jeopardy! contestant producer Maggie Speak to see if there was a way to push up her appearance on the show (if she was picked as a contestant) because she didn’t have much longer to live.

“If there is the chance that I’d be able to still tape episodes of Jeopardy! if I were selected, I’d like to do that and donate any winnings to … charities involved in cancer research,” Stowell said. “If it is unlikely that the turnaround time would be that quick, then I’d like to give up my try out spot to someone else.”

Stowell went to Oklahoma City and passed her audition, and as a producer promised, she was booked for the earliest available spot on Aug. 31. Only Trebek and a handful of staff members knew that Stowell had cancer, and for her first day of taping she had nausea, a fever, and abdominal pain. Her fellow contestants were unaware of her diagnosis as she won game after game. During a break in filming, Stowell spent a week in the hospital for a blood infection but was able to return for the next taping day on Sept. 13 to win two more games.

In all, Stowell won $103,801 over six games, which she donated to charity. Jeopardy! had sent Stowell and her family advance copies of her first three episodes while she was in the hospital and sent her prize money to her, which she received before her death.

Along with Trebek’s condolences, Jeopardy! posted a video of Stowell telling her story in her own words.

Jeopardy! contestant Cindy Stowell passed away prior to her shows’ airings. Here is her Jeopardy! story, in her own words. pic.twitter.com/MYFzJfxpAJ

Like her time on Earth, her Jeopardy! streak may have ended too soon, but her legacy lives on with her family and friends.

Going thru the "Who is Cindy?" cards from the memorial. Surprise takeaway – her karaoke renditions of "Regulate" and "Shoop" changed lives?