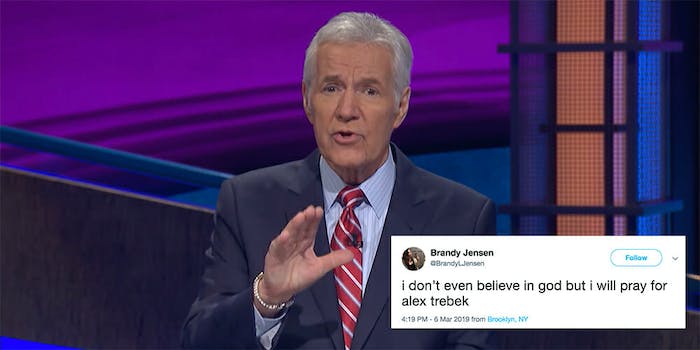 Jeopardy! host Alex Trebek on Wednesday shared with viewers that he’s been diagnosed with stage 4 pancreatic cancer. The 78-year-old gave a gut-wrenching message that was posted to the Jeopardy! Twitter account and YouTube channel.

A Message from Alex Trebek: pic.twitter.com/LbxcIyeTCF

“Now, normally, the prognosis for this is not very encouraging, but I’m going to fight this,” Trebek said. “And I’m going to keep working and with the love and support of my family and friends—and with the help of your prayers also—I plan to beat the low survival rate statistics for this disease.”

He continued with a joke, “Truth told, I have to because under the terms of my contract, I have to host ‘Jeopardy’ for three more years.” Then he ended on a somber note, “So help me. Keep the faith, and we’ll win. We’ll get it done.”

The heartbreaking news was met on Twitter with an outpour of support. Ken Jennings, the Jeopardy! champion with the longest winning streak, wrote that Trebek is “in a way the last Cronkite” because he has an “authoritative, reassuring TV voice you hear every night, almost to the point of ritual.”

I’ve said this before but Alex Trebek is in a way the last Cronkite: authoritative, reassuring TV voice you hear every night, almost to the point of ritual.

Pat Sajak, who hosts Wheel of Fortune, tweeted “the Sajak family is deeply saddened to hear of Alex Trebek’s struggle with cancer. Our hearts go to him and his family. But there is no one I know who is stronger and more determined, and I would never bet against him.”

Many fans also wrote words of support for the beloved gameshow host.

I have to be clear about this, and I mean every word:

Alex Trebek is not allowed to die.

alex trebek can have my pancreas. i'm not using this thing i don't even know what it does.

Cancer thinking it has a remote chance against Alex Trebek pic.twitter.com/glT49dQavJ

As CNN reports, Trebek has hosted Jeopardy! since it began airing everyday under syndication in 1984.