At least they changed the original story's awful headline.

FIFA, the world’s governing body in soccer, hasn’t treated the participants of this year’s Women’s World Cup particularly well. With all the problems that FIFA faces—looking hard at you, president Sepp Blatter—the way it looks at women is one of the biggest.

Before this year’s edition of the World Cup began, controversy erupted over why FIFA dictates that female soccer players compete on artificial turf (which leads to more injuries ) while the men play on natural grass, and in the leadup to Tuesday’s USA-Germany semifinal, it’s been revealed that the two teams are staying at the same hotel—said Germany’s coach Silvia Neid, via Soccer America, “I believe this doesn’t meet the level of professionalism you should expect at a World Cup. You run into each other all over the hotel, stand together in the elevator, in the lobby.”

Basically, as the Chicago Tribune recently opined, “FIFA doesn’t take women’s soccer seriously, an attitude it’s been quite open about for years.”

And that leads us to a feature of U.S. forward Alex Morgan, posted on FIFA.com. Here’s the screenshot of said story. 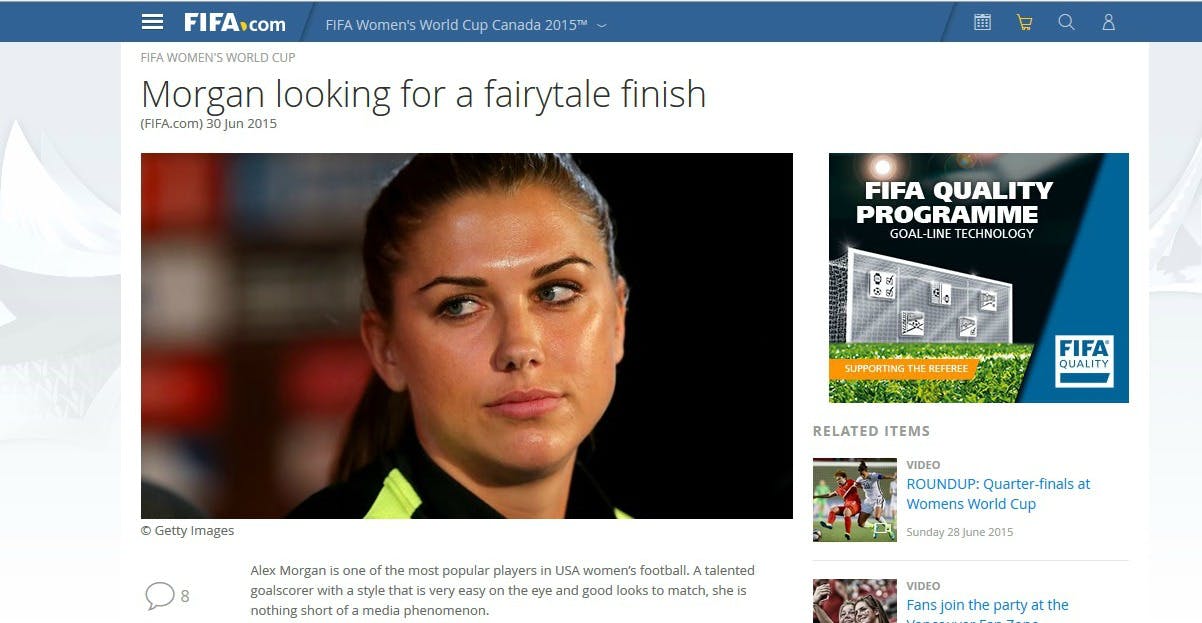 Let’s break down that lede, shall we?

First sentence: “Alex Morgan is one of the most popular players in USA women’s football.” This is true. And Morgan’s name was spelled correctly. Good start, unbylined author.

Second sentence, first 13 words: “A talented goalscorer with a style that is very easy on the eye …” OK. I don’t particularly love the “easy on the eye” cliche, but so far, there are zero major infractions.

So, here’s the problem. This story—the rest of which is fine and doesn’t judge her on her looks—should be harmless and easy to read. And the latter is true. But when discussing a player’s physical appearance—on the official FIFA website, no less—it feeds into the idea that FIFA is simply a sexist organization.

Making matters even worse is the original headline of the story, as captured by The Big Lead. 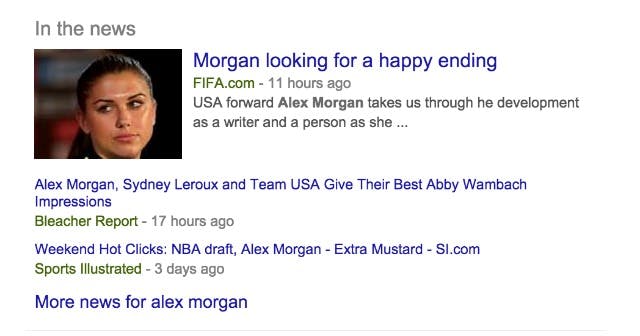 That headline obviously was changed, though the URL still reflects the original title (and the final graf also refers to a happy ending). While the headline might have been a simple mistake, it’s telling that despite all the online criticism, the original wording in the lede remains.

so i heard germany's soccer team has really great defense, but more importantly, HOW PRETTY ARE THEY?? http://t.co/ClMwoB97M0

As Daily Dot contributor Stephen Whiting recently wrote, “It comes down to respect. This tournament is treated along the same lines as the youth World Cups (which likewise play on turf), and not the equivalent to the men’s World Cup that it actually is.”

And the FIFA organization led by Blatter doesn’t respect the female players. How could it, especially knowing what Blatter said in 2004?

“Let the women play in more feminine clothes like they do in volleyball. They could, for example, have tighter shorts. Female players are pretty, if you excuse me for saying so… “

Photo via US Soccer