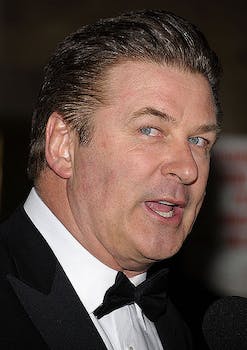 And he didn't "deactivate" his account after getting kicked off an American Airlines flight, either—he just tried to pull a fast one on the Twitterverse.

The actor made headlines yesterday for getting kicked off an American Airlines flight as he refused to stop playing Words With Friends, an iPhone game. And he made news again today for seemingly quitting Twitter.

Rather, Baldwin did what many people do when they get overwhelmed by tweets: He changed his username from @AlecBaldwin to @deactivated001. (It’s a fairly simple process, but not everyone knows how to do it—including fellow celebrity Demi Moore, who, despite her divorce from Ashton Kutcher, is still tweeting as @MrsKutcher.)

Then he apparently reregistered @AlecBaldwin and gave it the user name Deactivated to make it appear that he quit. (Reregistering one’s previous username is a recommended step to prevent spammers from hijacking it.)

There are several ways to tell that @deactivated001 is Baldwin’s account. For one, his tweet about getting kicked off the American Airlines flight is still featured as a top tweet, albeit under his new username. The only way that can happen is if he changed the username on his account. Also, @deactivated001 retained Baldwin’s Twitter following of more than 600,000.

Crafty Twitter users can still find the account if they search for @AlecBaldwin in Twitter’s search function and scroll down to find the actor’s tweets from yesterday.

For someone focused on his TV show, Baldwin sure seems to have a lot of time to play around with Twitter accounts.

Update: Baldwin continues to focus on “30 Rock”—by playing around with his Twitter account. He’s now switched @deactivated001 back to @AlecBaldwin. He appears to have wiped out his followers in the process, which was the goal he set out when he told followers last night he wanted to “crash this account.”