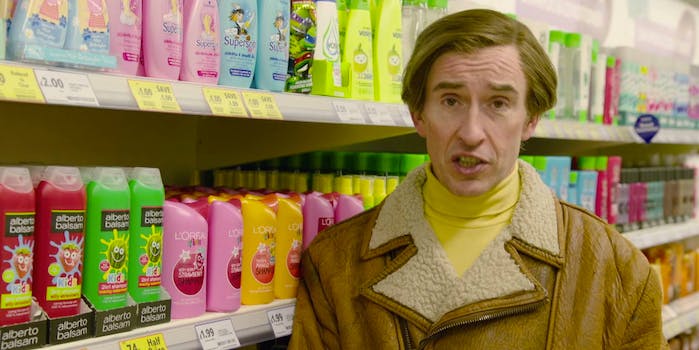 Alan Partridge returns to explore the class divide in Britain

Partridge, the alter ego of actor Steve Coogan, was created in the early ‘90s as a radio personality, but he soon found a niche with mock talk show Knowing Me Knowing You, which was created by Coogan and Veep’s Armando Iannucci. It was our first glimpse at this clueless egomaniac, who would emit a haughty “A ha!” at the start of each show and routinely embarrass himself in front of guests.

Partridge excels at embarrassing situations, and at the beginning of Scissored Isle, we learn he’s called a teenage boy a “chav” in-studio, and was caught on tape using the derogatory term the very next night. He goes viral, and popular opinion turns against him.

And so he attempts to atone for his gaffe by vowing to explore the class divide in “unreported Britain” and leaving his beautiful house behind. Partridge works at a grocery store, hangs out with a freegan, and does ecstasy with teens. There aren’t a lot of laugh-out-loud moments; Partridge is trying to convey some sort of message about privilege and disenfranchisement, but because he’s so self-involved, it gets lost. It’s more of a quiet humor.

He gets testy with an old lady at the supermarket. He tries to impress teens by buying them cigarettes. When the freegan he’s following ditches him in a warehouse, Partridge directs his voiceover vitriol at the man: “He could find a banquet in a bin bag, but couldn’t find real balls in his own ball bag.”

Though Partridge is very much a British personality, Scissored Isle feels especially relevant now. Partridge is trying to explore the divide between the haves and have nots: a “schasm,” as he intones. If the recent U.S. election proved anything, it’s that we’re definitely experiencing a schasm over here. But Scissored Isle is a Partridge vehicle, so the critique is more of our self-involvement, and how we make amends when we think it might be society’s fault, not ours.