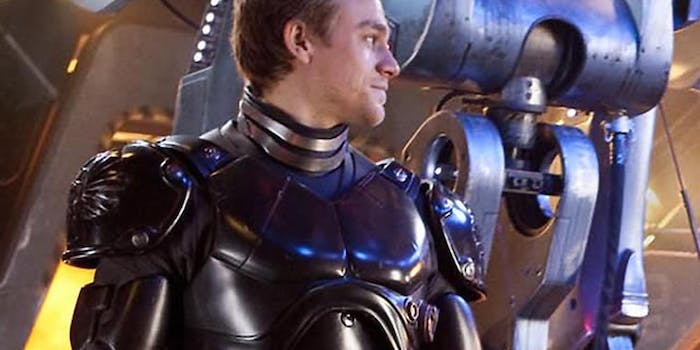 Spend a night in Barbie's dream house, or in Buzz Lightyear's intergalactic apartment.

The film Toy Story turns 20 on Sunday, and if that isn’t enough to make you feel old, here’s another fun fact: Andy Davis, the 6-year-old boy whose affections inspire a rivalry between Woody and Buzz Lightyear, would be a seasoned 26 years old if he existed in real life.

But rest assured, even if you’re too old for astronaut action figures or cowboy dolls, you can still live like one. Airbnb is filled with real-life versions of toy-sized abodes, allowing full-grown adults to live like their beloved toys from childhood, at least for a night or two. Just on the western edge of California’s Mojave Desert, you and your stead can stay in a ranch that Woody would have been proud to call home. Have a drink at the cowboy saloon, soak in your room’s clawfoot tub, or do some stargazing. Reviewers rave about the “tequila that flows like water” and that rare experience of sleeping under a tin roof during a desert thunderstorm. Being in the dog house doesn’t have to be a bad thing if you’re staying at the Dog Bark Park Inn in Idaho’s panhandle. The canine theme doesn’t end when you go inside: Each room is filled with a variety of different dog tchotchkes, you can play a round of “Beagle-opoly,” or browse their collection of dog literature. The inn’s owners use a chainsaw to create wooden canine figures you can bring home. Said one reviewer, “It was a neat experience to spend the night in the belly of a giant dog.” Stay in a restored sheep wagon used by the owner’s family during the 1920s. Located on an actual farm, guests will spend the night near a variety of different livestock, including (of course) sheep. Take pictures of the giant haystacks, cook a meal in your cast-iron stove, or go for a dip in the nearby lake. Buzz would have felt very much at home in these spaceship-inspired digs, located in the heart of one of the world’s most ancient cities. With the mostly white decor, the see-through ceilings, and futuristic architecture, it’ll feel like spending a night in a swank version of the International Space Station. Watch Star Wars in Italian on your room’s plasma television. Spending a night in Barbie’s dream house is possible in Essex. This lavish, bubblegum-colored estate sleeps up to 16 people, and includes an entirely pink-hued master suite with a king-sized bed. Since this is Barbie we’re talking about, the property also includes a jacuzzi, a disco ball, a full-equipped kitchen, and a photography studio. One reviewer said it was like “stepping into a Salvador Dali painting.” Bunk up in a military-style underground bunker like one of the Army Men figurines from Toy Story.  The location has 20 beds in total. The accommodations may look bare-bones at first glance, but that will change once you realize the property includes a Moroccan kasbah and a pub. Trixie, the neurotic green dinosaur in Toy Story, would love the return to a simpler, more prehistoric time. This secluded treehouse will take you straight back to the Jurassic Age. Reviewers talk about feeling like a million miles away from civilization, rather than in the middle of Atlanta.