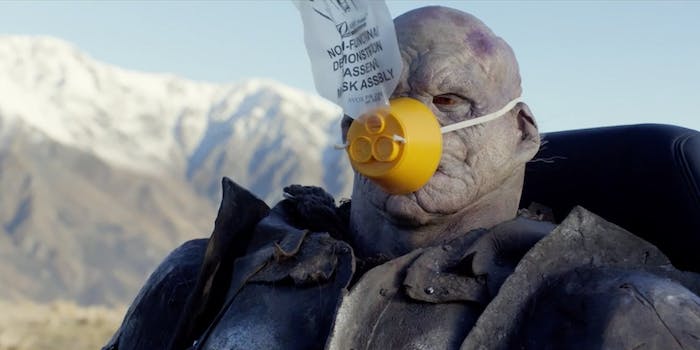 The next best thing to flying by eagle?

Air New Zealand has long embraced its homeland’s status as the Earthly home of all things Middle-earth, with numerous in-flight videos, custom plane designs, and vast fibreglass models in its terminals. Now the airline is taking these tie-ins to new heights with the release of what they call “the most epic safety video ever made.” What makes the video so epic is that it stars Frodo Baggins himself, Elijah Wood.

Gandalf, the Ring, and Orcish marauders all make an appearance, but it’s only the latest in a long line of Hobbit-inspired videos. First, in 2012, there was the “Unexpected Briefing,” which has been viewed almost 12 million times.

Then came the “Just another day in Middle-earth” ad in 2013:

The most recent video will probably be the last in the sequence, because—finally!—The Hobbit: The Battle of Five Armies is almost upon us, with a North American release date of Dec. 17, 2014. After that, Air New Zealand may, at long last, have to return to reality.

Until the next inevitable franchise spin-off, that is.