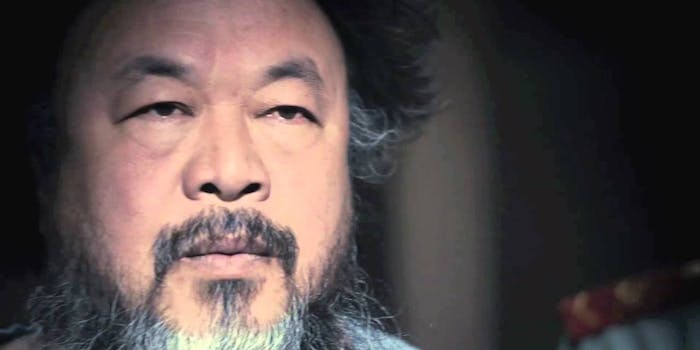 Ai Weiwei and the power (chords) of the virtual protester

On June 22, Chinese activist and artist Ai Weiwei released his debut album, The Divine Comedy, which marked the second anniversary of his release from nearly three months of imprisonment in 2011.

He wrote and sang all the lyrics, and Chinese musician Zuoxiao Zuzhou provided the symphonic metal score. Last week, he presented the video for “Laoma Tihua,” featuring a few scenes from the 2012 film Never Sorry, which documented his art, subsequent surveillance, and the aftermath of a beating he suffered at the hands of Chinese police. In late May, he released the video for the highly charged “Dumbass,” which used actors to recreate several scenes from his 2011 imprisonment.

Ai has attempted to use China’s microblog service, Sina Weibo, as well as Twitter to convey his message of dissent and document human rights violations, and he’s been a vocal opponent of China’s Internet censorship. All six songs relate experiences of dealing with police, and the surveillance of his daily life, which continued after his release. The somber “Just Climb the Wall” is a jab at China’s Internet firewall. The more ominous “Chaoyang Park” recounts a blogger uprising in a Beijing park in 2012.

The vocals are not easy to listen to, often at odds with Zuzhou’s harmonics, and the album fails to keep up the momentum of opener “Just Climb the Wall.” Still, it is another provocative gesture from the artist, and it brings up the question of medium. Ai, who is still restricted from leaving China, is trying a multi-platform approach to get his message out at an especially crucial time. One has to wonder if Ai met with whistleblower Edward Snowden while he was in China. Ai did criticize the NSA earlier this month.

Julian Assange recently joined forces with a Puerto Rican hip-hop group. Is music the new platform for the modern dissident? Is protest music now less about the musician or medium, and more about the virtual protester? On “Give Tomorrow Back to Me,” Ai turns the larger issue of privacy into poetry: