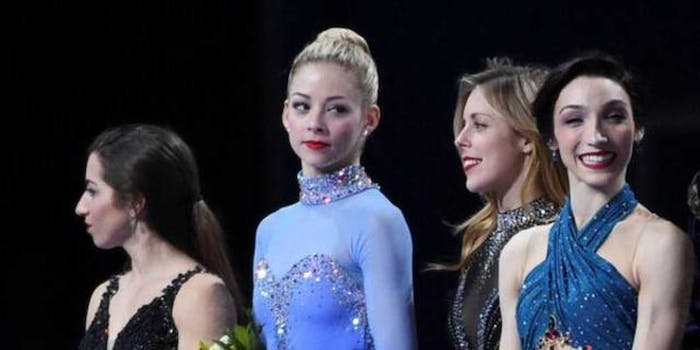 Are these tweets from Olympic athletes or their agents?

Apparently, we're all none the wiser.

The Sochi Winter Olympics have been a great source of entertaining tweets. Athletes have been busy sharing behind-the-scenes photos and commentary on what’s happening on the ground in Sochi. It’s been an amusing and insightful way to experience the winter games.

Oh but wait! Some of those tweets are pre-packaged, coming to you directly not from the athletes themselves but from their sponsors.

According to a new report, athletes who have social brand sponsorships have certain requirements for their posts—i.e., they need to upload X amount of Instagrams, Facebook posts, and tweets. And sometimes, when they can’t meet the demand they need to, someone from the brand steps in to lend a hand.

Two of the athletes working with such sponsorships are U.S. figure skaters Gracie Gold and Ashley Wagner. Wagner’s agent said he can access her account in order to tweet at her 60,000 plus followers.

“It’s not like Ashley doesn’t know about these. I mean we send her all these,” he told the AP. “She had to approve all of them, and so it’s not that she does not know what is being said. She’s seen it. She’s part of this whole process… it’s just that with her schedule, and if we can make things easier, what’s the difference?”

Well the difference is authenticity. We know hese tweets are commercialized, but removing the athlete eliminates any personal touch that might exist.

But that’s just what I think! Let’s actually look at some of Gold’s and Wagner’s tweets to see “what’s the difference.”

Did you know that I did gymnastics and swimming before I took up skating? #funtimes #smuckers #ad

Woke up this morning to a tweet from @taylorswift13 and @Jenna_Marbles following me! Is this real life?!! #fangirling #bestValentinesDayever

Thank you to everyone who sent such nice messages. I really appreciate your support. It’s an honor to rep the USA here in #Sochi2014 🇺🇸

The ladies of #TeamUSA left our mark in Austria today! Can’t wait to come back and be reminded of this great team!! pic.twitter.com/zrmKrB16ZC

Can’t wait to travel more as a @HiltonHHonors sponsored athlete! Where should I go next? #ad https://t.co/9wmtFYvDAV

So my coach just walked up and stole my quesadilla from me…I think he’s trying to tell me something ;P #thievery #dairylover #backtoverk

Watch my PSA with @AskListenLearn on NBC! I’m ready for #Sochi now more than ever because… https://t.co/nXHnsF3hyQ

Can you tell? If not, then kudos to these athletes’ agents. Keep the escapade (icecapade?) going.