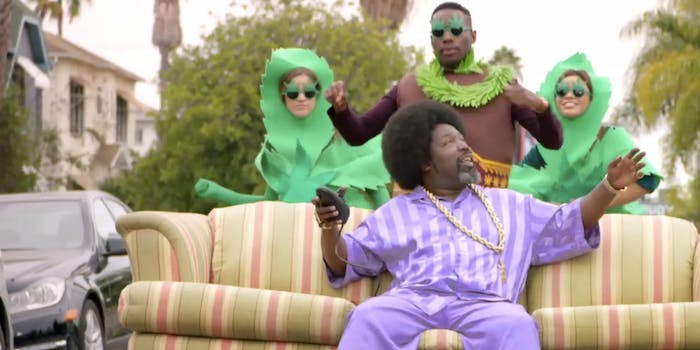 Afroman gets political with this ‘Because I Got High’ remix

Just try not to groove along.

Afroman, né Joseph Edgar Foreman, has churned out 20-odd albums since 2001 but is still best known for that year’s mega-single, “Because I Got High”—an ode to possessions, status, and relationships lost because of excessive marijuana use. But with arguments for legalizing the drug gaining momentum, it seems he’s changed his tune.

Behold, “Because I Got High,” redux: a “positive” spin on his classic track, produced in collaboration with the marijuana reform group NORML and Weedmaps, an online dispensary guide likened to Yelp. This time, instead of watching his life fall apart, Afroman marvels at pot’s medical applications, superiority to cigarettes or booze, and potential for swelling the coffers of government. (La da da da da da da da da.)

Afroman told Billboard that he has been in contact with NORML for several years now:

They’ve been educating me and giving me information. I got on a conference call with Sabrina [Fendrick, director of strategic partnerships], who enlightened me about some things: how states benefit from money raised from it, and how Colorado and Washington have money for drug treatment. There’s hope now, so I’m intrigued. This is a free track for education helping the legalization of marijuana.

The remix also kicks off Weedmaps’ Elevated Inspirations, a project designed to showcase the ways in which “weed powers creativity”—though good luck getting a prescription with that argument.