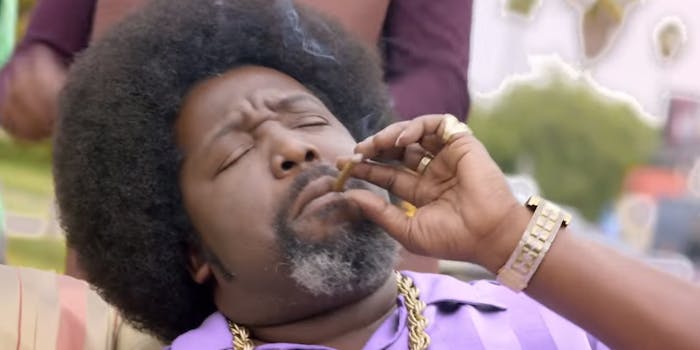 Potheads are generally a fairly congenial, peace-loving bunch. They’re usually too busy trying to figure out how to order burritos on Seamless to be rude or violent, but if they get out of line you can always just blare death metal at them and watch them run away and cower in a corner.

Afroman, however, belongs to a rare, entirely different breed of stoner: the violent asshole.

Following an incident earlier this week where he punched a female fan onstage, video has surfaced of the “Because I Got High” troubadour inviting a fan onstage, then literally throwing him offstage for not passing the blunt in an efficient manner. Not chill, Afroman. Not chill at all.

According to fan footage on YouTube, the incident went down last December at Thompson House in Newport, Ky. Afroman had just set the stage by singing an incomprehensible parody of “Deck the Halls”—I can’t really make out what he’s saying, but it seems to be extolling the virtues of road head—before inviting a fan onstage to smoke a blunt with him. But when the fan started Bogarting the joint, Afroman got frustrated and literally threw him back into the crowd, which you can see at the 1:45 mark.

Clearly, Afroman has some anger management issues, which have prompted concert bookers to cancel a slew of upcoming gigs. But he seems contrite about the whole thing, or at least as contrite as someone who cold-cocked a woman in public could possibly be:

Sorry, Afroman, but “because I got high” isn’t gonna cut it as an excuse this time.