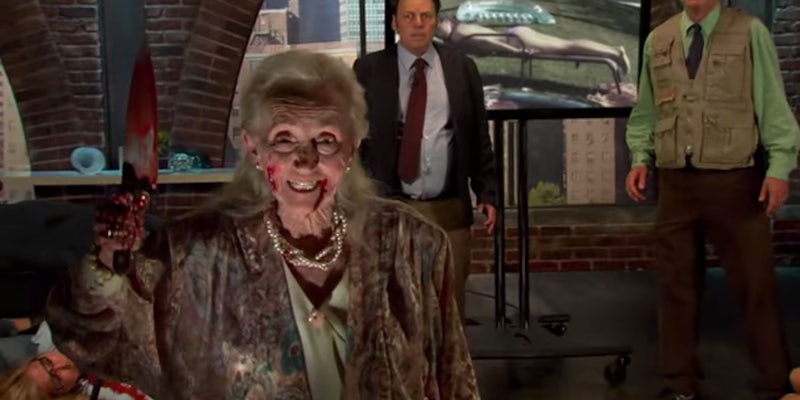 A look at all Adult Swim’s bizarre 4am infomercials

Adult Swim's infomercials are "simultaneously off the grid while being on television."

Too many thinkpieces have attempted to explain why we’re so obsessed with Adult Swim’s murder-filled infomercial, Too Many Cooks. Since creeping onto the Internet in early November, the clip has pocketed more than 3.3 million views, but if you zoom out a bit, there’s more to the channel’s renewed focus on nostalgia-and-dread-colored infomercials.

These spots air during the channel’s 4am ET graveyard shift, which likely makes up a good chunk of Adult Swim’s viewership. Those 3am infomercials you wake up to after falling asleep to a rerun of Seinfeld? The ones that seep into your dreams, obscuring the line between fantasy and reality? Adult Swim’s found a way to make them covert events. It’s always had a good grasp on content that makes us so uncomfortable or confused we have to share to get it out of our heads.

Adult Swim’s been playing around with the infomercial format for a while, but it hit its stride with Too Many Cooks, which brought more eyes to that 4am dead zone. One of the most notable clips from the new infomercial series is Tom Scharpling and Jon Wurster’s The Newbridge Tourism Board Presents: We’re Newbridge, We’re Comin’ To Get Ya!, a godsend for fans of WFMU’s The Best Show, which went off the air last December. Julie Klausner and Gilbert Gottfried also star in this spoof of a small New Jersey town, complete with a catchy theme song breakdown and questionable sports team name. Scharpling’s directorial fingerprints are all over it, and Wurster’s fake directors and professors mimic the cast of oddball characters he did for The Best Show.

Just give Scharpling and Wurster their own show, already.

“Jon and I have done a bunch of different things for Adult Swim over the years,” Scharpling told the Daily Dot. “And we’ve talked to the execs up there about doing something that involved the world of The Best Show. The infomercials seemed like a great place to do that; they’re simultaneously off the grid while being on television. It’s a fun place to try the stuff out and see what works. So we pitched Ollie Green on the Newbridge infomercial—she has been a fan of the radio show—and she was into it. So we did it.”

Green, a producer for Adult Swim shows like Delocated and Metalocalypse, pointed out what makes these late-night fever dreams so appealing.

“Personally, I find all of our 4am original programming—the Infomercials and Off the Air—to be awesome little treats for anyone up at that difficult hour,” she said.

“We’ve wanted to bring the radio stuff to life for years,” Scharpling added. “Adult Swim were great the whole way through—they cut us a wide swath to do what we wanted and their notes brought out the best from the whole thing.

Just give Scharpling and Wurster their own show, already.

While the Newbridge spot stays true to The Best Show’s brand of comedy, other Adult Swim infomercials descend deeper into the rabbit hole. And you’ve got to keep an eye out at 4am, because you never know when a new nightmare’s going to appear.

Comedian Kurt Braunohler stars as an oblivious host selling increasingly large vibrators to women dying to get “mixed.” The spot advances from the ’60s to present day, and the aged host still doesn’t quite understand what people are actually using them for.

Goth culture is so hot right now. This clip proves that fitness nuts are actually under the spell of ancient demons.

Adult Swim always manages to find convincingly terrifying children for their spots, and the host of this one is no different. Also, kids’ toys turning into murderous drones: great idea or the greatest idea?

In Search of Miracle Man

The infomercial obsession with junk science continues, with Rich Fulcher and Matt Besser as hosts. More specifically, the obsession with a shadowy “Miracle Man” fuels the inevitable ending: murder, naturally.

You knew the day would come when your pet would overpower you.

Since all of our devices have to be “smart” these days, this startup aims to be the “Venmo of pipes.” Not the pipes you’re thinking of, though a Smart Bong should definitely be a reality by now.