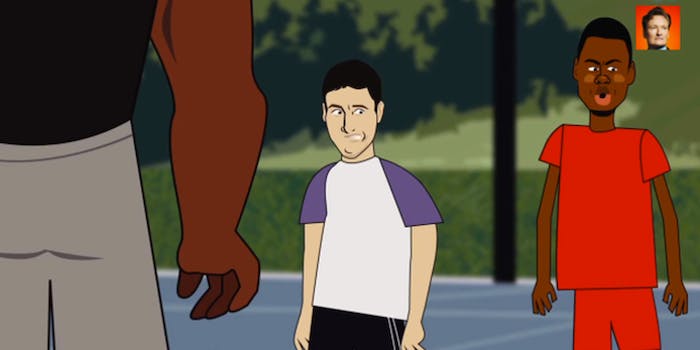 Adam Sandler’s been making the rounds to promote his latest attempt at humor, Men, Women & Children, but last year he told Conan O’Brien a story that was far more entertaining. And it involved a quest to see costar Shaquille O’Neal’s penis on the set of Grown Ups 2.

This is understandable: Who doesn’t want a glimpse of Shaq’s heat? But now, Sandler’s story has been animated by Dilara Karabas, in the style of Looney Tunes. It’s titled “Adam Sandler & the Fantastic Mystery of Shaq’s Penis,” which is an Adam Sandler movie I would actually watch. Please someone pitch this to Netflix.

Sandler explains he waited for Shaq to get in the shower on set, then lurked around hoping to catch a glimpse. But one does not simply walk in on a hot-and-lathered Shaq shower. His security foils Sandler’s plan, but Shaq has the last laugh: He offers the perfect punchline when Sandler tries to apologize for creeping on his D.