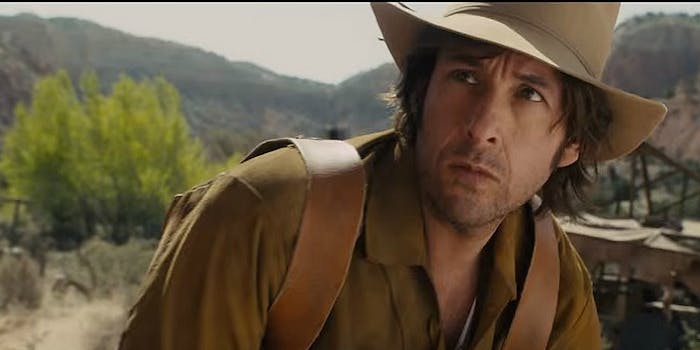 You'll apparently have to actually watch the film to see any supposed controversy.

Despite signing an exclusive four-film deal with Netflix—which, for some reason, must have thought this would be a great idea—Adam Sandler had a spot of trouble last April when filming his latest movie as a number of Native Americans walked off the set because the script was so culturally insensitive and insulting.

Yet, the movie continued forward, and now Netflix has released a trailer for The Ridiculous 6. It features no racist-tinged humor. Only, as should be expected, unfunny gags.

A group of Native American actors and a cultural adviser bolted from the set, due, in part, to insensitive jokes that included names like “Beaver’s Breath,” “No Bra,” and “Stiff-In-Pants.” Other insults included an actress being asked to squat and pee while smoking a peace pipe and featured punchlines like “I put my pee-pee in your teepee.”

Here was part of the conversation between the offended actors and one of the film’s producers, who said he understood the position of the actors but emphatically stated that Beaver’s Breath would not be changed.

Fortunately for all the Sandler fans out there, the show went on, and they can see the results at a theater near them on Dec. 11. For everybody else, it’ll just be Friday.