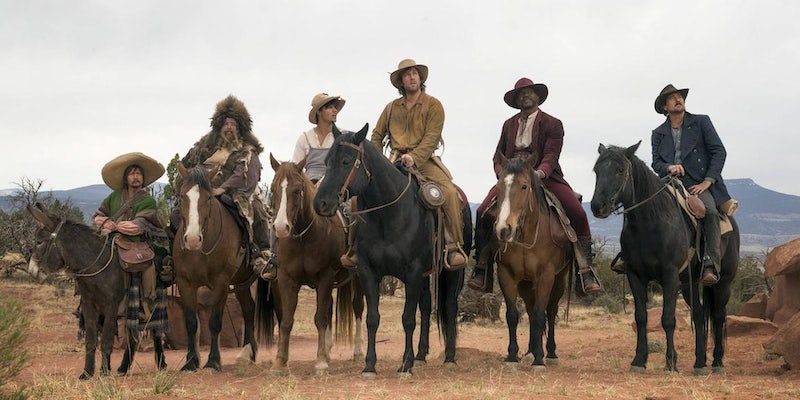 With ‘The Ridiculous 6,’ Netflix gave Adam Sandler a little too much creative freedom

Yes, there are three more of these movies coming.

Appraising an Adam Sandler movie is a difficult thing to do.

Roger Ebert’s own scoring system was based on a curve, graded against other movies in the genre. But if we’re judging from Sandler’s own filmography, The Ridiculous 6—his first film with Netflix—has the rare distinction of both being one of the worst movies of the year and not really that bad. When you’ve been involved with Jack and Jill and That’s My Boy (two of the worst movies of the decade), any cinematic sins you commit afterward seem comparatively minor. For instance, if you had to witness your whole family being murdered in front of you, watching a bunch of adults giggle at their farts for two hours would seem much less horrifying.

For everyone expecting The Ridiculous 6 to be epically bad—due to the well-publicized controversy in which the film’s Native American actors walked off set in protest of the script—the problem is it’s nothing you haven’t seen in an Adam Sandler movie before. In Jack and Jill, Sandler cast Latino superstar Eugenio Derbez as his gardener, just to force him to spout racist and anti-immigrant jokes the whole movie. In one of the film’s strangest scenes, Derbez also plays a hissing, bug-eyed Mexican grandmother who is repeatedly knocked unconscious; her family revives her by cramming jalapeños in her mouth.

The Ridiculous 6 is, of course, littered with casual racism and sexism, particularly in its treatment of women of color. For instance, not a single Native American woman in the movie is given anything to do, except utter a few lines in a skimpy top, and even the characters’ names are nakedly honest about why these women are in the film. Sandler plays a white man who was raised in a First Nations tribe, and his love interest—I’m not shitting you—is named Smoking Fox. Other women in the community are referred to as “Beaver Breath” and “Wears No Bra.” The latter aggressively propositions Sandler the entire film, to remind us—yet again—that he might appear to be a normal schlub, but Adam Sandler is actually the most attractive and desirable man in the world.

This is a point Sandler movies make relentlessly: If Frank Capra provided us male heroes who stood in for the goodness of the American dream, Sandler’s guys are only reflective of their own awesomeness. In That’s My Boy, Donny might seem like a delinquent dad, an alcoholic, and a loser, but he’s actually totally rad. If Big Daddy’s Sonny Koufax raised a minor in any way resembling how he treats young “Frankenstein” (the name he lets Julian give himself), that child would be taken away by Protective Services immediately; however, in Sandler’s world, Sonny is both a misunderstood hero and a model of alternative parenting.

Sandler co-wrote the script for The Ridiculous 6 with Pixels’ Tim Herlihy and saved himself the best part: a hypercompetent assassin who can listen to the wind and scale tall buildings with his daggers. The script offers only the barest of plots: Six men find out they are half brothers after their libidinous father (Nick Nolte) is kidnapped, and go on a robbery tour to raise the money to get him back. That’s about enough story to sustain a few montages, but unfortunately, The Ridiculous 6 is 116 ungodly, interminable minutes long—padded with donkey diarrhea jokes, Taylor Lautner’s character repeatedly reminding us that he has a third nipple, and a bizarre interlude of Harvey Keitel running from a demonic dummy (a la The Conjuring).

But The Ridiculous 6 isn’t about revenge of the Old West any more than Pixels was about video games. This film is the fullest realization of Sandler’s artistic vision yet—which is to get paid to goof around with all his friends. The film has an absurdly stacked cast of Sandler comedy troupe members (David Spade, Rob Schneider), big-name character actors (Steve Buscemi, Steve Zahn), veterans who are way too good for this s**t (Nolte, Harvey Keitel), celebrity cameos (Blake Shelton, Vanilla Ice), and D-listers who presumably didn’t have anything else to do (Mr. Lautner). They all look like they’re having way more fun than you’ll have watching them.

Like Grown Ups 2 before it, there’s little actual movie here—unless you count “Taylor Lautner pretending to engage in bestiality” or “Rob Schneider wearing a sombrero and saying burro a lot” as an actual film. If The Ridiculous 6 succeeds ever so slightly more than the usual Sandler outing, it’s because a few of his castmates are much funnier than the movie deserves. Lost’s Jorge Garcia is surprisingly amusing as Sandler’s half-brother, who is forced to communicate in grunts, while John Turturro gets the only genuine laughs of the movie as the man who invented baseball. He calls it “Sticky McSchnickens.”

The biggest issue with The Ridiculous 6, even more than its retrograde politics, is that it lacks any kind of comic discipline. Sandler’s own laziness—as a writer and producer—dilutes even the jokes that work a lot better than they should: The baseball scene goes on for something close to 10 minutes, simply because it can. This has always been a problem in Sandler’s movies (That’s My Boy likewise pushes the two-hour mark), but it’s unlikely to get better under Netflix’s “creative freedom” model. This gives the big names the streaming platform works with—including David Fincher and Judd Apatow—enough rope to either roam free or hang themselves.

If you’re wondering how The Ridiculous 6 came to be, remember that it wasn’t made for you; it was designed to keep a multi-millionaire happy. Heralded as the first entry in a four-picture deal between Sandler’s Happy Madison production company and the ever-ubiquitous streaming platform, The Ridiculous 6 might be the first post-audience movie. Netflix notoriously doesn’t publish its streaming numbers, which is perfect for a movie star of rapidly dwindling popularity, one more interested in getting a major studio to bankroll his vacations than making a good movie. Sandler doesn’t really care whether you like The Ridiculous 6—or if you’re even watching.

If you think The Ridiculous 6 is bad, remember that we’ve got three more of these left to go.