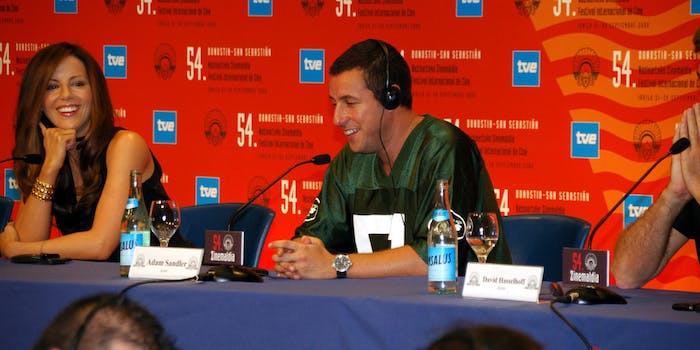 Adam Sandler has signed an exclusive four-movie deal with Netflix—and perhaps for the dumbest reason.

Just the other day, Netflix announced that the Crouching Tiger, Hidden Dragon sequel would be its first feature film in 2015. Netflix would team with Sandler’s production company, Happy Madison Productions, and the first of the four movies (presumably comedies) could arrive as early as 2015.

There’s no word on whether there’s a plan to bring the movies to theaters; AMC and Regal are already protesting the plans to bring Crouching Tiger, Hidden Dragon to IMAX theaters.

While Sandler’s more recent films have been almost universally panned by critics—New York Times film critic A.O. Scott describes Sandler’s character as “both über-doofus and ultimate mensch, disguising his tireless bullying in childish voices” in a viral review of Blended—he’s proven that he’s still box office gold. His films have grossed approximately $3.9 billion worldwide, and according to Netflix, his films on the streaming service are consistently the most-viewed by subscribers both in the U.S. and beyond.

Netflix chief content officer Ted Sarandos praised Sandler, and said that his appeal “spans across viewers of all ages—everybody has a favorite movie, everyone has a favorite line—not just in the U.S. but all over the world.”

Sandler’s reasoning for signing the deal with Netflix is a lot less diplomatic.

“When these fine people came to me with an offer to make four movies for them, I immediately said yes for one reason and one reason only… Netflix rhymes with Wet Chicks,” he said in a statement. “Let the streaming begin!”

The possible vacations may have also had something to do with it.