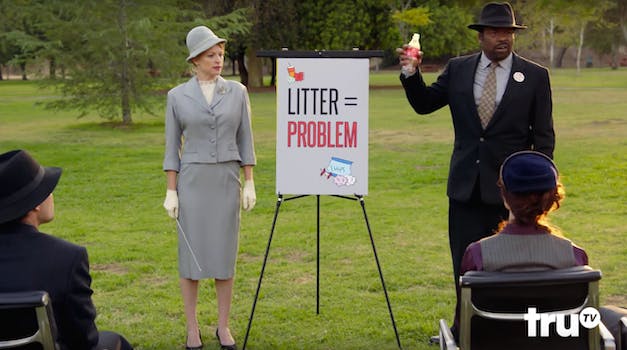 We fell for it.

TruTv’s Adam Ruins Everything has ruined it once again, pointing out an all-too-real plan that shifted blame away from corporate America for our littering problem.

The clip focuses around Adam Conover, the show host and CollegeHumor cast member, explaining how corporate greed manipulated individuals into thinking that litter is a sole result of consumers’ actions. Conover goes on to say that the nonprofit, recycling-loving Keep America Beautiful was actually founded in part by companies like Coca-Cola and Philip Morris; that their marketing was created to condemn citizens for all the pollution—absolving themselves for blame.

The show is known for a lighthearted, comedic approach to questioning and tackling misconceptions followed by facts, figures, and a little bit of history. He’s pretty much that friend who knows absolutely everything and ruins it all for you, even if you didn’t ask to hear it. Get educated and watch the clip below.

Damn, he did it again.