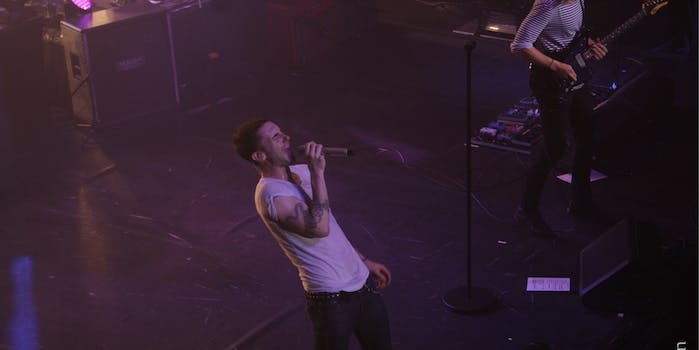 Adam Levine’s biggest fan, a little boy with Down syndrome, meets his idol

The Maroon 5 frontman has a soul after all.

Christopher Warner, a 10-year-old with Down syndrome, is Adam Levine’s biggest fan. And the Maryland kid got the surprise of his life when he was invited as a VIP to the band’s recent show in Washington, D.C.

Warner’s teacher posted a video of him on YouTube expressing his love for Levine and his band’s music.

The video, which has been viewed 465,000 times, fell into the hands of local radio station Hot 99.5. The people there arranged for Warner, his mom, and four teachers from his school to be given the royal Maroon 5 treatment.

When Warner finally came face-to-face with his idol backstage at the Verizon Center, he reportedly got a little shy and crouched on the floor. This inspired just about the sweetest photo of all time.

Christopher was so overwhelmed he had a panic attack so @adamlevine @maroon5 @internjohnradio laid down to take a pic pic.twitter.com/lGP5SIeZNX

Adam Levine is a divisive pop culture figure. Some think he’s a bit of a douchebag, a pop music poseur with a penchant for super models. But he’s undeniably talented, and after watching him as a judge on The Voice for what feels like 27 seasons at this point, he seems like a pretty okay guy.

Maybe this was a PR stunt. Or maybe Adam Levine is just a Nice Jewish Boy at heart.