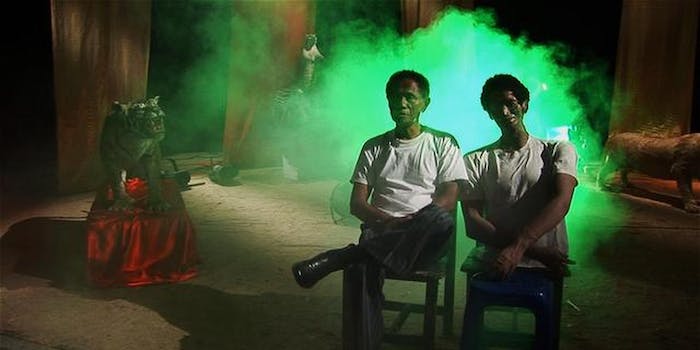 "People were beginning to question the official history. And a lot of that discussion was happening on Twitter and Facebook.”

In September 1965, the Indonesian military overthrew the government, and death squads were formed to help execute anyone who was a threat to the country’s “New Order”: communists, intellectuals, ethnic Chinese. In the span of one year, death squads executed approximately one million poeple in the purge.

Director Joshua Oppenheimer spent eight years in Indonesia, interviewing survivors and perpetrators of the massacre. His Oscar-nominated documentary, The Act of Killing, follows Anwar Congo, one of the death squad commanders from 1965, who is still revered in Indonesia and speaks proudly of his acts. Many of the perpetrators he interviewed did.

Because of this chilling openness, Oppenheimer asked Congo and his old associates to reenact certain torture scenes. In one early scene, Congo gleefully employs an old method for strangling a detainee with wire. Elsewhere, he and his supporting cast dress up as ’50s gangsters and stage a noir torture scene, then offer a sunny, guided tour of the spots where they murdered people.

The film hinges on these surreal revisionist histories and sets within sets. At one point, Congo critiques his performance and wonders out loud if what he did was wrong. At the end of the film, he retches on the rooftop where he murdered thousands, as if attempting to exorcise himself of centuries of demons.

It’s a powerful film, one that documents history’s descent into terror and genocide from a new angle. This movie, which was picked up by Drafthouse Films, has gotten quite a bit of publicity in Indonesia. But there are still powers attempting to censor, and Oppenheimer’s Indonesian co-producers have needed to remain anonymous. That’s where social media has stepped in, helping publicize the film and give it life outside official channels.

In a Reddit AMA with Oppenheimer and co-producers Errol Morris and Werner Herzog last Monday, one commenter stated:

“Thank you for making this movie. None of us would dare or even think about making anything like this. The Indonesian government is hard at work to discredit you and the Ministry of Communications and Informatics have blocked your website if we try to open it from Indonesian domain. Also from Google search.”

“It’s hard to know whether [the Ministry of Communications] did it, or if the government hired cyber thugs to do it,” says Oppenheimer. “There’s [an Internet group] that’s hired to attack political opponents, so they could have very well been hired to attack our website.”

The film managed to spark controversy on Chinese social media as well, but for different reasons. China was in the midst of Mao’s Cultural Revolution at the time of the purge, and many people there have only just learned of the mass massacres of ethnic Chinese thanks to the film.

Oppenheimer says social media in Indonesia has been mostly beneficial, both in spreading the word about the film, and unifying the country in general.

“I think social media has come to Indonesia almost with the same power as the national language,” he explains.”Twitter might be bigger there than in [the United States]. Human rights lawyers might have 500,000 followers, millions of followers if they’re any type of celebrity. So I think social media’s been hugely important in raising dialogue about the genocide, and also for getting the film out.

“People are sometimes afraid of downloading the film, so we’ve put it up on YouTube without English subtitles, as something people can stream for free. We know the film’s been downloaded three-and-a-half million times, which is an awful lot.”

Those numbers are impressive, but so is the new dialogue pushing back against decades of revised history, which is attempting to bridge a gap between generations.

“We’ve had great support from the largest newspaper in Indonesia,” Oppenheimer says. “They produced a double edition of their magazine dedicated to showing The Act of Killing was a repeatable experiment, that it could be made anywhere in Indonesia, that there’s thousands of men like Anwar Congo living with impunity around the country. But much of the rest of established media said nothing about the film.

“On social media, there was this really active debate about the consequences of the stories we tell about the past. So the film revealed to everyone in Indonesia what they suspected was true—that the official history is a lie. This film was made as an antidote to fear, and people were beginning to question the official history. And a lot of that discussion was happening on Twitter and Facebook.”

Indonesia’s presidential spokesman Teuku Faizasyah recently told Reuters: “It’s a tragedy and we, just like anybody else, despise those in the movie and the reenactment of the atrocities.”

Oppenheimer agrees that stance is a big step for a government that was once attempting to christen the architect of the genocide a national hero. If they’re still being cagey about their role, the government will soon have more to ponder. Oppenheimer will shortly release a follow-up film, The Look of Silence, which focuses on the survivors of the massacre.

“I think the government finally made this about face because they knew that the film wasn’t going away.”