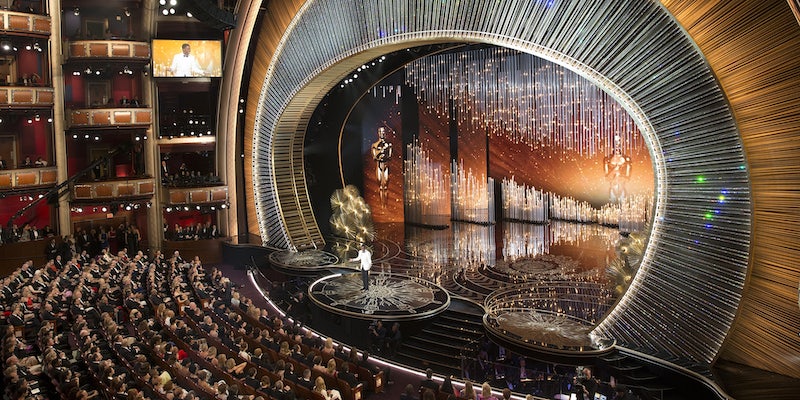 The 7 biggest moments for #OscarsSoWhite during the Academy Awards

It went beyond Chris Rock's monologue.

Chris Rock’s scathing Oscars monologue was only the beginning.

Prior to the Oscars, many figured that Rock would acknowledge #OscarsSoWhite, the hashtag and movement that resurfaced after the Academy failed to nominate any people of color in the acting categories (as well as many categories behind the scenes) for the second year in a row. But he went much deeper.

Diversity and race not only dominated much of Rock’s material throughout the show, they even got some play before the ceremony as Total Beauty’s Twitter feed tweeted a photo of Whoopi Goldberg and identified her as Oprah. (The site has since apologized.)

With so few Black women who are Academy members, you would think… nvm. #OscarsSoWhite pic.twitter.com/ayiFFsxsnW

Outside of Hollywood, artists, activists, and filmmakers such as Ava DuVernay, Ryan Coogler, Hannibal Buress, and Ledisi gathered in Flint, Michigan to put on a free benefit concert, #JusticeForFlint, and raised more than $122,000 for the residents affected by the Flint water crisis.

No paid promotion. All word of mouth. $122k raised tonight for Flint recovery. Thank you to all 3022 activists who donated. #JusticeForFlint

April Reign, who started #OscarsSoWhite last year, organized a viewing of The Wood for those who wished to boycott the Oscars ceremony.

Here we go!! We're live tweeting The Wood on @netflix starting NOW! Use #OscarsSoWhite and make it trend! pic.twitter.com/pWs2th69W9

With the #OscarsSoWhite hashtag being used for the boycott as much as the ceremony itself, race was fresh on everyone’s minds. And Rock made it a key part of his material as many of the award recipients showcased the lack of diversity; 31 men and 12 women won Oscars and the majority of those winners were white. Even as people of color failed to get the spotlight on stage, diversity and #OscarsSoWhite were front and center.

Nothing was off the table. Rock launched right into addressing the Oscars’ racial issues in his monologue by commenting on the film montage that played right before him.

From there, he addressed the history of black activism and Oscar diversity, mocked Jada Pinkett Smith’s decision to boycott the Oscars after her husband didn’t get a nomination, defined Hollywood’s racism, and called for studios to give black actors the opportunity to play significant roles.

It made people laugh, for sure, but it also appeared to make even more people in the audience visibly uncomfortable.

Where’s the diversity? It ended up on the cutting room floor, at least according to this prerecorded parody showing Rock, Goldberg, Leslie Jones, and Tracy Morgan with roles in some of the night’s nominated films.

Why those scenes were cut we’ll never know.

Rock explained how the Academy would address the issue of diversity and then brought out Dash, who has a complicated history with race, onto the stage. Her explanation was a head-scratcher to many.

Right after that, he finished off with “but enough about black people, let’s bring out Sarah Silverman.” Soon after, he would lead off after a commercial break with “and we’re black.”

4) Rock throws in his towel for Michael B. Jordan

He’s just as mad about the Creed actor’s snub as the rest of us.

One who was nominated standing next to someone who should have been. @creedmovie #Oscars pic.twitter.com/4cbquHnca8

In another pre-recorded sketch, the Academy did a segment on Black History Month—but who it’s discussing may surprise you.

6) Rock went back to Compton

Reprising a man-on-the-street sketch he did in 2005, Rock returned to Compton to talk to regular people about the lack of diversity and #OscarsSoWhite.

But one person’s would-be acceptance speech encompasses part of the hold-up on making Hollywood diverse: “I would complain, but it was me so maybe I’ll complain next year.”

The Academy has already proposed sweeping changes for how the Academy operates, and president Cheryl Boone Isaacs took her time onstage to discuss it once again.

“While change is often difficult, it is necessary,” she said.

Spotlight took home Best Picture to close out the awards ceremony, but Rock used his platform one last time to acknowledge the diversity issues as he invited everyone to the BET Awards and name-checked Black Lives Matter.

"I want to invite everybody here to the BET awards." Chris Rock's farewell at #Oscars, where he also gave shout out to #blacklivesmatter

And as the credits rolled, the show played “Fight the Power,” a powerful statement on a night full of them.

The song FightThe Power is beyond me & the crew.The point of the song is a call to making change eventually not just applauding the thought

Had to sit through 3 1/2 hours to get it, but closing the Oscars on Public Enemy "Fight the Power" makes up for a lot of sins.