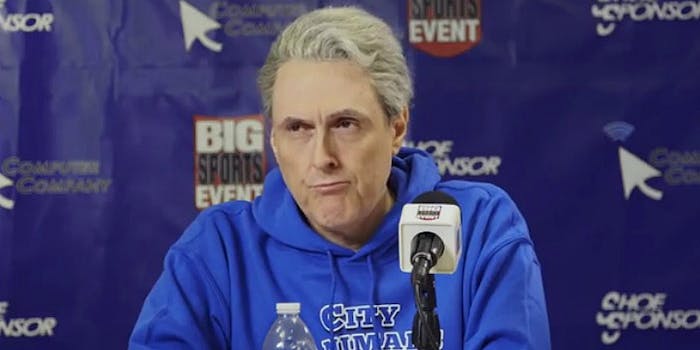 Since 2012, Above Average has played host to non-Saturday Night Live material from those who are on Saturday Night Live, including webseries that revolve around rival notaries public and a media coach who gives her clients horrendous advice.

Now, Above Average, the digital video extension of SNL producer Lorne Michaels’ Broadway Video, has set its sights on sports, as it debuts “the Kicker,” a streaming-video/fake news site that combines sports and comedy with help from (on the comedy side) former SNL standout Andy Samberg, current SNL veteran Kenan Thompson, and “Weird Al” Yankovic (that’s him in the photo above, by the way), and (from the sports side) Giants receiver Odell Beckham and Eagles receiver DeMarco Murray.

As Bryan Tucker, SNL’s co-head writer and editor of the Kicker, writes, “We thought the world needed another website. Welcome to The Kicker, a place for sports fans to laugh. We’re comedians and comedy writers, but we’re also truly, rabidly into sports. We will have videos, articles and lots of daily content for sports fans of all types. Our mission is to keep it positive, fan-centric, and most of all, fun. We’re not here for analysis or commentary. There’s enough of that out there. We’re here to be funny.”

Here’s a sampling of what the Kicker has produced thus far.

So, what’s the point of the site, besides a few absent-minded yuks in the middle of your workday?

2. Existing comedy outlets fail to engage the world of sports.

… The Kicker seeks to connect the worlds of sports and comedy on a more consistent basis by leveraging the combined street cred of seasoned comedy writers and big-name pro athletes and producing content that taps into fans’ emotions­.

“The Kicker provides brands with a unique way to create an authentic dialogue with passionate sports fans, using customized programming and relevant, high-quality comedy content,” Jones said in a statement, via Mashable. “We will be building an audience that is young and digitally savvy, attracting hardcore and more casual sports fans.”

As Tucker joked about, there are indeed plenty of websites out there. In order to make its mark, the Kicker will need to continue to bring in the star power while, more importantly, churning out the funny.

H/T Variety | Screengrab via The Kicker/YouTube