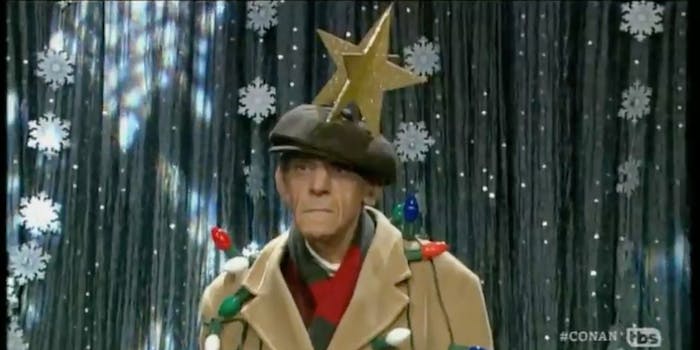 He agreed to it all.

Fans and Hollywood colleagues will surely remember character actor Abe Vigoda, who died Tuesday at age 94, through the many memorable roles he’s portrayed over the years. But Conan O’Brien honored his other legacy on late-night TV.

Vigoda has been the subject of death hoaxes since 1982, but he’s always been a good sport about it; in 1988, a young David Letterman had him breathe onto a mirror to prove he was still alive.

“I couldn’t believe how many times Abe would come on the show and do hilarious things for us,” O’Brien said. “We used to call him up and sometimes would have the idea three hours beforehand, and it’d usually be the silliest thing. Abe would always come right over, do it. Such a lovely guy.”

Andy Richter spoke of the day he and Vigoda spent in Coney Island on a remote shoot for Late Night and described him as a kind and lovely person.

O’Brien’s tribute—which included everything from dressing Vigoda up like a Christmas tree and discussing the dangers of a Vigoda eclipse to dressing him up like Yoda and O’Brien literally setting him free from a cage—is as loving as it is deprecating. The Late Night crew put Vigoda through a lot over the years, but he also appeared to love every minute of it.