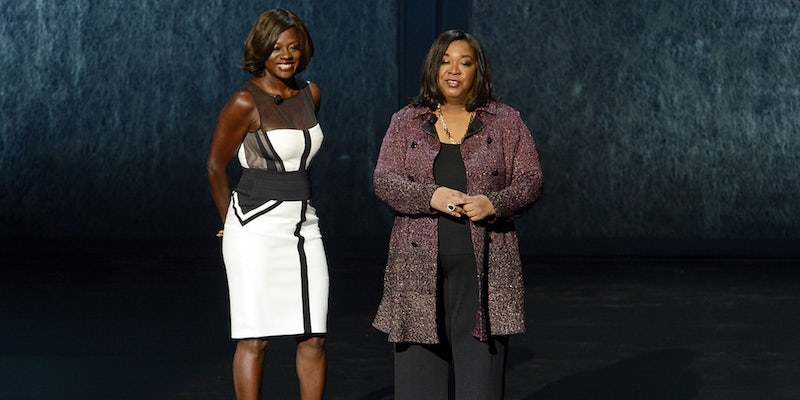 How the Internet is changing the face of diversity on television

The future is now, and if networks don't realize it, they'll get left behind.

ABC has been receiving a lot of attention light of their decision to steer the network’s programming toward a more diverse lineup. Entertainment Group President Paul Lee said in a statement, “We wanted to reflect the changing face of America,” but the thing is: America’s face has been diverse for a while now; it’s just not shown on television.

Treating diversity as if it’s something new for television is beyond presumptuous. For those living in the current age, seeing a group of people of different races, religions, sexes, and orientations is nothing new. The fact that we still don’t really see it on television yet is what’s most shocking. Especially when it’s been proven that it’s good for networks.

A study recently conducted at UCLA on racial diversity in the entertainment industry found that viewers were drawn to shows that had a more diverse lead cast and writers—yet somehow ethnic minorities and women continue to be the most underrepresented on television as lead actors, writers, and show creators.

What makes the few shows that portray diversity most so successful? According to the study, it boils down to people wanting to see what relates to them in their everyday life. The real world isn’t white-washed. And ABC is taking note: Instead of producing only a few shows that display diversity, they’ve chosen an entire roster.

ABC’s new additions include Black-ish, a comedy starring Lawrence Fishburne and Anthony Anderson; Cristela with Cristela Alonzo; Selfie, featuring John Cho, Fresh Off the Boat, starring 11-year-old Hudson Yang; and the network’s crown jewel, How to Get Away with Murder, starring Viola Davis and created by Shonda Rhimes.

While it’s wonderful that ABC is promoting diversity because that’s how America is, a lot of this diversity stems straight from Shonda Rhimes, a minority herself.

Rhimes’ first television show for ABC was Grey’s Anatomy, a show that created waves due in large part to its immensely diverse cast. The race of the cast was only addressed within the show when deemed necessary, otherwise it was a show about a hospital with a lot of different types of people within its walls. Grey’s also spawned a spin-off, Private Practice, which had another cast with a fair amount of diversity. The success of Grey’s allowed for Rhimes to pen another hit with a diverse cast, Scandal.

Scandal is a show that has become a beast all its own, and a lot of the credit for that can be given to social media outlet Twitter. While Scandal lives up to its name, Twitter allows for a lively gathering of fans to attempt to predict what will happen next and react accordingly, what analysts call “second screen” engagement. The second screen has become such a large factor in TV viewing that the Nielsen ratings system has launched the Nielsen Twitter Ratings System, which looks at how many people are tweeting about the shows they’re watching live.

When the new ratings system launched, Nielsen looked at the top 10 socially engaged programs of fall 2013, where Scandal ranked fourth with an average of 375,000 tweets per episode. And all that Twitter hype intrigued the masses, which helped its viewership on Netflix, after all, it’s human nature to want to know what everyone is always talking about.

This hype machine helped Scandal win a Shorty Award for television, a honor which ranks success from a social media standpoint. The nominees and winners are chosen based on how many tweets they receive about a specific television show or other medium. As the show is a Twitter and ratings juggernaut, ABC has nothing but faith in Rhimes.

The network believes in Rhimes so much, in fact, that Thursday nights will be Specifically Shonda. The entire three-hour block will be Grey’s Anatomy, Scandal, and the aforementioned How to Get Away with Murder. The jokes about the network being hers are only half-jokes, it would seem. It’s safe to say a large part of Rhimes’ success, outside of writing great drama, is that she doesn’t shy away from a diverse cast, and ABC is clearly picking up on that.

By getting people talking about diversity in television, ABC is taking a huge step.

In the early ’90s, FOX attempted to engage a young, diverse audience with black-centric programming (such as In Living Color and Fresh Prince of Bel-Air) but weeded out most of their racially oriented shows as the network pushed for a broader audience. Recently, as the network works to re-brand themselves as the “next generation network,” FOX has been revisiting that commitment, urging its shows to reflect a diverse casting. To comply, network hits like New Girl, Sleepy Hollow, and Brooklyn Nine-Nine feature multiple black castmates.

But in courting an Asian-American and Latino viewership, ABC is deciding to do their best to appeal to everyone. If they can get their audience to stay on Twitter (and it’s safe to say Thursday nights they will be), ABC will be able to generate more buzz for their diverse programming—forcing other networks (who often have a difficult time pulling in younger viewers) to take a note.

As NBC runs around like a chicken with its head cut off—in the wake of canceling the Internet-beloved Community—it’s a reminder that the future is now, and it’s leaving them behind.