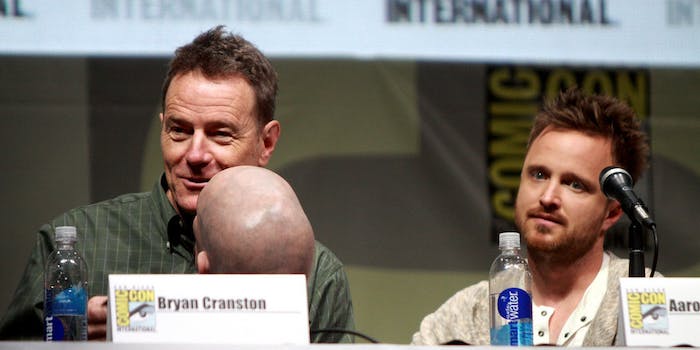 The stars of Breaking Bad aren't happy with those toys being pulled off the shelves of Toys "R" Us.

Florida mom Susan Schrijver led the push to get the toys removed because she didn’t want her children to be exposed to them and called the decision to sell them alongside other toys “a dangerous deviation from their family friendly values.” She started a petition, which got media coverage and more than 9,000 signatures before Toys “R” Us complied and removed them.

Bryan Cranston, whose Breaking Bad character was one of the toys that got removed, expressed his disapproval over the petition and Toys “R” Us’s decision but managed to get the last laugh.

Toys R Us puts Breaking Bad toys on ‘indefinite sabbatical.’ Word on the street is that they were sent to Belize. Nicely played Florida Mom.

However, Cranston’s costar Aaron Paul is a lot less willing to make jokes about it. He’s just really mad about the whole thing, and he went on a Twitter rant to prove it. Leaving no target untouched, he first went after another famous doll.

Wait, so @ToysRUs pulled all of the Breaking Bad figures from their shelves and still sells Barbie? Hmmmm…I wonder what is more damaging?

He somehow tried to get President Obama involved.

“@BarackObama: Wait, are you serious about the whole @ToysRUs thing?!?” Yes I am Mr. President. Yes I am.

And then he tried to point out that the toys weren’t any worse than the violent video games Toys “R” Us likely sells in its electronics section.

And what about all of the violent video games you sell @ToysRUs ? Do you still sell those? Florida mom really messed it up for everyone.

Paul then tweeted out a petition that aims to get the toys back in stores, which has already gotten more than 27,000 signatures as of press time, bitch.