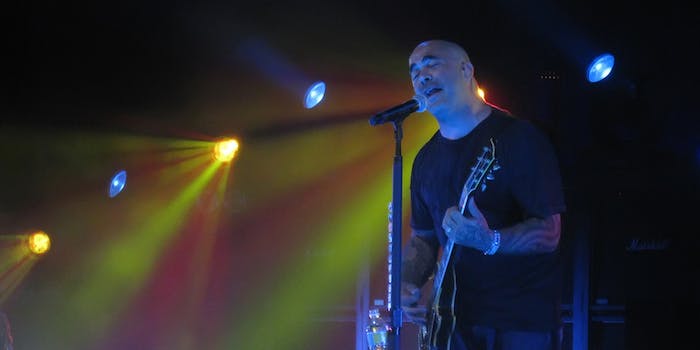 All eyes are on him.

The San Francisco Giants’ shutout went off without a hitch Sunday night, but not before a major error kicked off the game.

Staind singer Aaron Lewis took to the field to sing the National Anthem in front of thousands at AT&T Park and millions watching. While he started out strong, he joined that list of people who’ve royally messed up America’s most important song. Sorry, Lewis, but “What so proudly we hailed were so gallantly streaming” is not how it goes.

He finished out with the correct words, but the damage had already been done. Tim Lincecum’s face says it all.

After the performance, Lewis released a statement and said that nerves had gotten the best of him.

“All I can say is I’m sorry and ask for the Nation’s forgiveness. My nerves got the best of me and I am completely torn up about what happened. America is the greatest country in the world. The Star-Spangled Banner means so much to so many, including myself. I hope everyone can understand the intensity of the situation and my true intent of this performance. I hope that the Nation, Major League Baseball and the many fans of our national pastime can forgive me.”