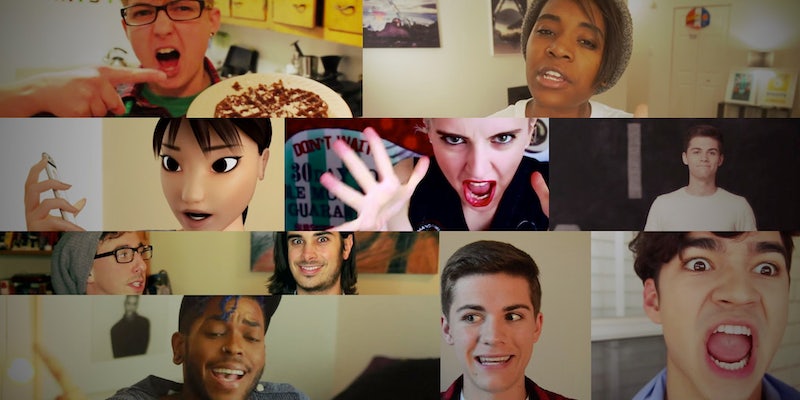 The platform has become a smaller and smaller feedback loop of bigger and bigger stars.

As YouTube stars have edged into the mainstream with big brand deals, movies, books, and billboards, the platform has become a smaller and smaller feedback loop of bigger and bigger stars. Those creators with half a million or more subscribers represent the idea of what YouTube success looks like in this new era of entertainment. But what about the new kids to the game or the channels that just began to hit their stride in 2015?

With YouTube’s seemingly endless supply of potential talent and channels to choose from, the platform’s emerging talent can often be overlooked in favor of those who’ve already achieved big subscriber counts. But those smaller-scale operations have  their own active fanbases and produce content on par with their big name counterparts. To give some attention to these under-the-radar creators, we selected nine YouTube channels that are poised to make an even greater impact in 2016, from vloggers to musicians to sketch comedians who just might be the next big-name YouTuber of tomorrow.

Ben J. Pierce might have the URL KidPOV on YouTube, but this 16-year-old is cornering the teen market. In 2014 he took on gender stereotypes with his “Little Game” music video, and he has continued to climb the YouTube ranks since. While many other YouTubers are stuck behind structured signing tables at a venue like VidCon, Pierce can still hold in-person meetups triggered by his own social media. One we witnessed this summer included impromptu midnight dance-offs., teaming up with the likes of Tyler Oakley, Between giving makeup tutorials on how to be an egg and sharing his child star game show past, Pierce has been collaborating his way to more exposure by teaming up with the likes of Tyler Oakley.

Jackson Bird was already a fixture of the nerdy YouTube scene when he caught massive attention this year for his transgender coming-out video. He’s worked with the Harry Potter Alliance in its quest to turn fandom into activism, and he has been running his series “Will It Waffle” with guests like John Green. Adding in a mix of transgender issues was the perfect formula to catch the eye of Eddie Redmayne, who has been shouting out Bird in interviews for helping him prepare for both The Danish Girl and Fantastic Beasts and Where to Find Them. Thanks to that, Bird (who, full disclosure, was once my intern) might be one of the YouTubers with the biggest mainstream influence right now, if you know where to look.

Foxy Hot Mess, aka Jade, describes herself as a “urban comic with a slick tongue and even slicker bangs.” Her style is a mix of comedy and rant videos, and she’s taken on everything from Beyoncé’s imaginary audition for FOX’s Empire to the realities of being a Little YouTuber to meeting your YouTube crush IRL. Unlike much of the Los Angeles–clustered YouTube world, Jade resides in Virginia, and she keeps fans up to date with her daily life with a vlog series on her second channel.

You might notice something strange right away about Ami Yamato, a U.K.-based vlogger: She’s animated. However, Yamato approaches her channel (described as “videos that confuse people”) just like any flesh-and-blood vlogger would, and she doesn’t seem to think of herself as a virtual being at all. When people hoping to to learn about the animation software behind Yamato ask “how do you make your videos” in the comments, she responds with videos that explain what kind of webcam she uses. She even recently posted her own videos of trying to learn how to animate cartoons. It’s fascinating, and definitely the kind of genre-bending experimentation perfectly suited to YouTube. Can the next top vlogger be virtual? Yamato is here to find out.

Netting caught YouTube attention a few years ago with a Harry Potter and Book of Mormon mashup video—no surprise, since Netting has Broadway chops as an original cast member of Billy Elliot. She’s now acting in Los Angeles, with a recurring role on Disney’s Bunk’d, and entertains her legion of Starfish on various social media channels with her mix of music, geekdom, and general vlogging. She’s even an Etsy crafter, digging deep into her fandom roots for a line of bows suited for every form of fangirl.

Lateef would really like you to know that no, he’s not Kingsley. Just because he’s a black YouTuber who rants and does comedy on his channel doesn’t mean he’s the same as one of YouTube’s most established acts. Lateef is a huge anime fan who lives in Florida and has been making videos for the past two years on his channel, adding in some lifestyle vlogging with men’s fashion and get-ready-with-me videos. He’s collabed with Miles Jai and weighed in on the scandals of 2015, and he’s just getting started.

Sketch comedy is an ever-growing segment of YouTube, but finding a group that can be both consistent and funny, instead of just a single-joke flash in the pan, is a challenge. Enter the Tin Can Brothers, who make modern comedy with a fair amount of fake moustaches. Joey Richter, Brian Rosenthal, and Corey Lubowich, the trio behind TCB, have their roots in another YouTube phenomenon, Team Starkid, whose Harry Potter parody musicals went viral starting in 2009. The L.A.–based group has been uploading weekly sketches since 2014, mostly recently a series that parodies the trials and tribulations of vlogger boyfriends on the verge of a breakup. (Full disclosure: I had a guest role in one of their videos this year, and I’ve known the trio since I started covering YouTube and StarKid in particular in 2011.) Their major project for 2016 is an offline one—a spy-themed musical running in Los Angeles that they funded through Kickstarter—but they’ll be keeping fans updated with sketches, podcasts, and other digital treats along the way.

Music and nerd culture have a solid home on YouTube, and the Doubleclicks exist at the intersection of the two. The sisters from Portland, Oregon, combine their musical talent to produce geeky videos about Doctor Who, dinosaurs, and even Jane Austen. When they aren’t making cello music for the Web, they’re on tour bringing their unique sound to loyal fans in the flesh. If you can’t catch them in person, you can still follow along with tour vlogs and Web-based performances.

Jordan Doww was already building a successful presence on Vine when he decided to transition his strong following to YouTube, and it’s paid off. The 20-year-old moved from Detroit to Los Angeles for a Disney internship and has stuck around to break into the entertainment scene in 2015. His biggest hit this year was a coming-out video, a phenomenon that also elevated in saturation level with several big name YouTubers coming out after having established millions of followers. The difference with Doww is he’s starting his channel with his authentic self, and building from there. Doww has attended conferences and spoken on panels about challenges as a smaller-scale YouTuber, and he will kick off 2016 with his first sketch and improv show in Los Angeles.