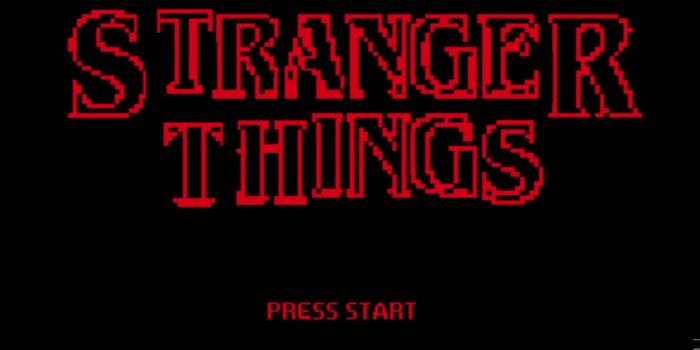 Created by the Dutton brothers in honor of the Duffer brothers' hit show.

Stranger Things has inspired a whole lot of fan art, specifically 8-bit homages that play on the show’s ’80s aesthetic. Creators Matt and Ross Duffer have even hinted at bringing the upside down and the entire Stranger Things world into video games.

They’ve yet to announce any further details but it’s certainly on the minds of fans as more and more artwork hits the web. This 8-bit cinema vide from CineFex ought to further stock the fires of the Duffer brother’s creativity.

The video is a spot-on retro thrill ride, from the midi theme to the Clash’s midi-fied “Should I Stay or Should I Go?” It’s also a great way to refresh your memory, as creators the Dutton brothers have transformed some of the most iconic scenes from the show’s first season into 8-bit vignettes.

It doesn’t look like anyone’s gone the extra mile to craft a fully playable 8-bit video game but with this latest Stranger Things offering, fans are that much closer to the real thing.