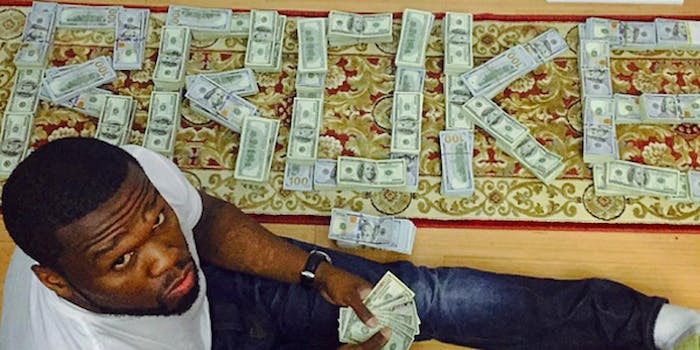 He did it for the 'gram.

For months, 50 Cent has been confusing the Internet by Instagramming himself with huge amounts of cash despite his very public financial troubles. This week he finally admitted that it’s all for the faves.

The rapper filed for bankruptcy in 2015 after being ordered to pay $7 million for releasing a sex tape, so you’d expect him to be opening a savings account right about now. Instead, he’s spent the past few months snapping pics only Oprah should be able to take IRL:

Man this lunch money,I gotta go to work I'm still up, no Sleep at all. NEW MUSIC this week,Off The KANAN tape. #FRIGO #SMSAUDIO

The photos were so flagrant that a Connecticut judge called the rapper back into court this week to explain himself and verify that he is, in fact, in financial trouble.

According to the Wrap, a court declaration was filed Tuesday stating it was all “‘prop money’ used for G-Unit Records and videos and photo shoots.”

The rapper then added, “Just because I am sensitive to the needs of maintaining my brand does not mean that I am hiding assets or that I have lied on my filings in this Bankruptcy Case.”

So there you have it, guys. Be careful what you ‘gram, because it may come back to haunt you.