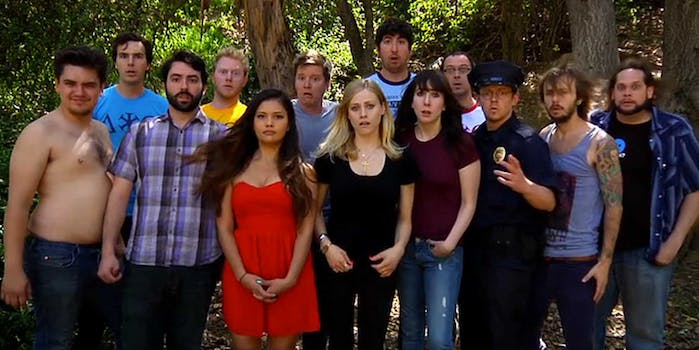 The guys behind 5-Second Films have been making bite-size movies for YouTube every weekday since 2008, but now they’re about to embark on something a little longer: a full-length feature film.

The Internet comedy troupe launched a Kickstarter campaign to make a 5,400-second film version (about 90 minutes) of one of their videos, Dude Bro Party Massacre 3.

The five-second film has the feel of an ’80s slasher, and even within the strict length of their videos, there’s plenty of blood and gore.

The original episode was released in 2009, but they were inspired to make an 89-second trailer for the film a year later. That trailer expands on the character as well as the intended plot.

“The more comments we saw on both videos, the more we knew that we weren’t the only ones who wanted to see these oiled-up bros get chopped to bits in the gory, blood-spraying, hilarious fashion that 5secondfilms is oh-so-good at,” 5sf wrote on their Kickstarter page.

According to their pitch video, DBPM3 is a “bloody tale about a bunch of bros who go to an abandoned sorority house by a lake, but then ‘Motherface’ starts picking them off one by one according to their fears: Heights, commitment, running out of beer, even puppies.”

But with more time to fill, they’re also including a softcore subplot and intend to make DBPM3 feel like a VHS recording from the late ’80s with host segments, TV commercial parodies, and fake news alerts.

5SF was essentially making Vines before Vine was a thing, but they’ve assured their audience that after working together for five years, they can handle making a full-length film just fine.

“We’ve been doing this a long time,” they wrote. “Both on our own and as hired professionals.”

They even have an endorsement from comedian Patton Oswalt.

My favorite young filmmakers want to make the most bugfuck movie I’ve ever heard of.LET’S MAKE IT HAPPEN:kck.st/1atkX8W

They’ve raised more than $37,000 toward their $200,000 goal over the course of two days, and there’s plenty of time before the campaign ends on July 1. You can watch their pitch video below.