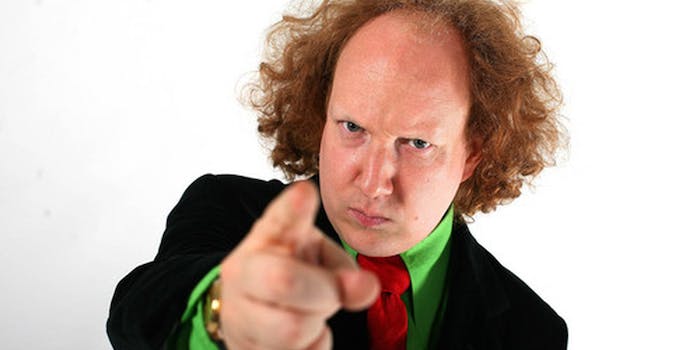 5 great recurring gags on “The Bugle”

From "Fuckeulogies" to pun runs, comedian Andy Zaltzman discusses his podcasts' most oft-reused and hilarious gags.

The Bugle makes for delightful listening, but with 200 episodes and five years in the podcast’s rear-view mirror, it’s built up a daunting library of running gags and recurring references. This can make the podcast tough to access for the new listener. With that in mind, here are five of The Bugle’s most oft-reused, and hilarious, recurring gags—jokes that are all-but-certain to reappear again.

When The Bugle’s first producer, Tom Wright, stepped down after more than 100 episodes, he was replaced by freelance producer Chris Skinner. Skinner was immediately greeted with (mock?) hatred from The Bugle’s vocal fanbase. The ironic animosity has since become a running joke, with its own dedicated website.

“The hopefully pretend hostility resulting from our beloved previous producer emigrating to the other side of the world has been something to witness,” Zaltzman observed. “I think Chris has learned to live with the public hatred and has slowly won the listeners over through his dedication to The Bugle brand.”

Possibly the best portmanteau ever invented. John Oliver coined the term when discussing Osama Bin Laden’s death and continued to use it throughout 2011 as a series of despots kicked the bucket, including Muammar Gaddafi and Kim Jong Il. As Oliver said in The Bugle’s 169th episode, “When fuckeulogizing, it’s important to focus on the many, many sides of the person in question that you will not miss now that they’re gone.”

3) The Cinematic Oeuvre of John Oliver

There’s no two ways about it: If you pull up John Oliver’s IMDB profile, the most prominent film roles are unfortunately The Smurfs and The Love Guru. This is the source of many a barb from Zaltzman.

“So I think it’s probably justified. And I’m sure when I get cast in a Hollywood feature film he’ll do the same thing for me. It’s just a matter of time.”

When leaked emails revealed that Syrian dictator Bashar al-Assad purchased LMFAO’s inexplicable dance hit “I’m Sexy and I Know It,” Oliver and Zaltzman took obvious delight and have since integrated the song—and any errant news about LMFAO—into the podcast at any opportunity. If you’re ever curious why the bizarre musical duo of SkyBlu and Redfoo get so much play on The Bugle, well, there you have it.

By far the most infamous of The Bugle’s many running gags. Zaltzman has a deep fondness for puns, and has been known to launch into five-minute “pun runs” incorporating themes as disparate as Dickens references, fish, tennis and North Korea.

“I used to have the occasional one-off pun in stand-up, but it was never something I felt willing or able to do at length until I had the endless acreage of space that a weekly podcast provides,” noted Zaltzman. “I guess that just unleashed the beast. The fact that John seems to find them so painful has just goaded me into doing more of them, and making them longer.”