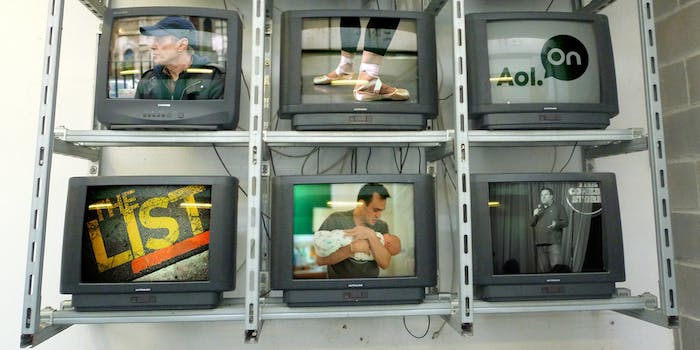 The 5 best shows on AOL Originals

This is not the AOL that used to carpet bomb us with trial disks.

Finally, a show about something.

That’s what Steve Buscemi says from his perch on an everyday park bench in the Emmy-nominated show aptly named Park Bench. Buscemi’s signature webseries is part of a generally overlooked collection of digital programs known as AOL Originals. The slate of shows, which is gaining momentum as it draws well-known behind-the-camera talent to its fold, includes some of the more enjoyable video content the Web has to offer.

Yes, this is not the AOL that used to carpet bomb us with trial disks.

Nate Hayden, who in early August was named head of AOL Originals, told the Daily Dot that the secret to his company’s video series is “providing authentic voices who tell unique stories.” In the case of Park Bench, nominated for Outstanding Short-Format Nonfiction Program (losing to ESPN’s 30 for 30 Shorts), Hayden said Buscemi came to AOL with a vision. “Steve talked about an old cable access show that featured the late Lou Albano and a guy from the patent office. The show was about creating connections between people, and he wanted to replicate that,” Hayden recalled.

“The fact it was Emmy-nominated is a testament that we have been successful in putting the right people in the right place,” Hayden added.

Part of success for AOL Originals, Hayden went on to say, is what he called a corporate attitude of “doing them on a rain-or-shine basis.” That creative lead over instant revenue means the network is focused on nurturing an audience and not necessarily worried about driving a huge audience right away.

Of the webseries available on AOL Originals, here are five standouts that should be added to any TV viewer’s must-see list.

While quite a few of the episodes are funny, insightful, or both, the pilot, which features Chris Rock, is hilarious. “Oh, it’s a talking show, not a talk show,” says Rock. (It sounds funnier when he says it.)

A few of the others worth catching are those featuring Rosie Perez and Joel Grey.

Ballet may not be your thing, but the stories behind what it takes to become a member of the New York City Ballet go far beyond dancing. Produced and narrated by Sarah Jessica Parker, the episodes of City.Ballet successfully capture the creative passion and competitive nature of those who aspire to become part of this 66-year-old cultural institution.

I can’t say that I love every one of the 12 episodes of Fatherhood, actor/voice master Hank Azaria’s unexpected voyage into becoming a dad, but when it hits the right note, it soars. Not only do we see Azaria go from someone who had no interest in being a parent to sudden fatherhood, we watch as he checks in with his famous buddies (Kevin Bacon, Bryan Cranston, Mike Myers) to get their points of view. It’s long on good-natured bantering, perhaps a tad short on strong parental advice.

The premise of putting famous actors behind the camera to create a short point-of-view film may seem tired, but in the hands of such folks as Jeff Garlin, Katie Holmes, and Judy Greer, the idea works. I’d like to think of these vignettes as miniature masterworks that capture the essence of what drives individuals to success. I liked Holmes’s episode on empowering young women to succeed against the odds so much, I immediately sent it to my 22-year-old daughter.

Again, not necessarily a series where every episode knocks it out of the park. Perhaps the setup in calling it a show in which famous names change the status quo is a tad too much hype. Still there a few strong pieces here, especially with Adrian Grenier talking about SHFT, a company focused on sustainability, and Moby with his Web venture Mobygratis, a venture that offers free music to filmmakers.

There’s more to come, Hayden said, speaking of some of the AOL Originals programming that will launch later this year. A few highlights:

Making a Scene with James Franco: Franco chats with fellow actors about their favorite movie scenes and what makes them great.

Win/Win: Pairing famous athletes with big names in business to discuss how they achieved their advanced status.

So Much More: The story of Laura Jane Grace (née Tom Gabel) of the band Against Me! who came out in 2012 as transgender.

Photo via Pat Guiney/Flickr (CC BY 2.0) | Remix by Jason Reed