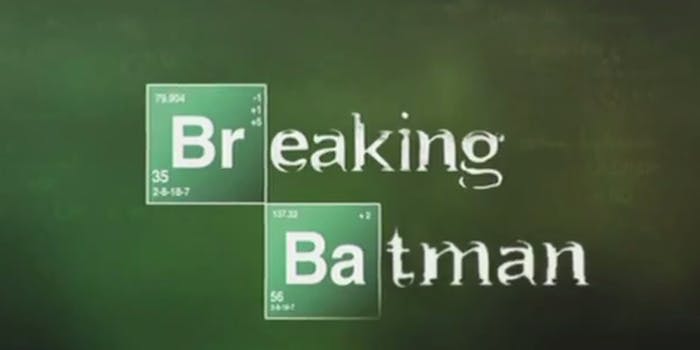 Comedian Jimmy Fallon is a great impersonator. On several occasions, the late night host has imitated Neil Young and Bob Dylan on his program. More recently, he gave a voiceover to The Dark Knight Rises trailer–as if by Pee-wee Herman.

Although the video is hilarious, it’s by no means the only Dark Knight parody making the rounds. In anticipation of the film’s upcoming release, the Daily Dot compiled the top five Batman mash-ups that have surfaced on YouTube in recent months.

Before making The Dark Knight trilogy, Nolan made the magic-oriented thriller, The Prestige, with actors Christian Bale and Michael Caine. While the premise of the 2006 film is wholly different from any of the Batman movies, the trailers are eerily similar. This mash-up from YouTuber Dominaz3000 shows you just how alike they are.

In Frank Capra’s 1946 Christmas classic, It’s A Wonderful Life, Henry F. Potter poses a huge threat to the citizens of Bedford Falls, New York. Not unlike Mr. Potter, Dark Knight villain Bane wants to watch Gotham City in ashes. In this mash-up trailer uploaded by user philyaofilms, it’s up to Batman and George Bailey to stop them.

Although there’s more than one mash-up trailer that combines The Dark Knight Rises’ audio with footage from the newer Star Wars trilogy (like SnoogansLostie’s version), the video uploaded by FTboy18 stands out because of how well some synchronizations work. A good example of this occurs at the 1:45 mark, when the heavy percussion begins.

Some of the pairings found in moviemaestroten’s mash-up of The Lion King and The Dark Knight Rises trailers are truly astounding. The audio of a wary Alfred lecturing Bruce Wayne works well with Zazu reprimanding a young Simba.

You guys! Bruce Wayne and Breaking Bad’s Walter White are the same person! At least that’s what YouTube user TheQuanRude wants you to believe with his mash-up video that takes footage from the popular AMC show (season 5 premieres July 15) and all Batman movies made by Christopher Nolan and Tim Burton.