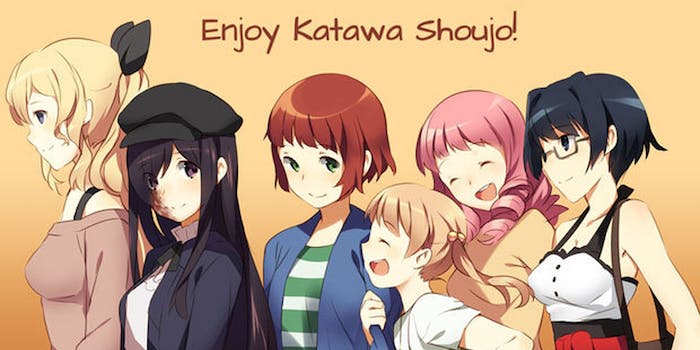 In Katawa Shoujo, users try to seduce high school girls with disabilities—but that's not what makes it interesting.

Katawa Shoujo is a video game that lets you woo and seduce five animated high school girls with physical disabilities and deformities. But that’s not the most interesting part.

What’s even more intriguing is that this indie game is the most ambitious project to ever come out of 4chan, an anonymous image-sharing board. After five years of development, the game’s 21 contributors released the project today for free.

Katawa Shoujo, which translates to “Disability Girls” in Japanese, follows the tradition of Japanese “dating simulation” games, in which the player assumes an avatar and chooses one of the (usually female) characters in the game to pursue.

However, Katawa Shoujo is the first of its kind to originate on a Western message board and to be developed to completion by fans.

The story of Katawa Shoujo begins in the annals of 4chan, where an anonymous poster shared a drawing of a concept for a dating game where each heroine had a different disability. Call it a fetish or genuine empathy, the concept resonated with 4chan users. A group of anonymous posters decided they were going to make the game. Their chosen name, Four Leaf Studios, is an obvious reference to their platform of origin.

As they worked, the Internet began to take notice. Katawa Shoujo gained mainstream attention in 2010 after Kotaku contributor Leigh Alexander played a demo of the game and opined that its treatment of sexuality and disability “combines the sincere with the unsettling.” Her article introduced the fan-made game to 100,000 new pairs of eyes.

Now, the society widely reputed as the internet’s strangest, saddest shut-ins has managed another major feat: since late in 2007, they’ve assembled themselves as an international team of amateur game developers and producing a highly-polished demo.

That’s the miracle of Katawa Shoujo. On a forum supposedly designed for image-sharing, trolling, and general time wasting, these 21 fans made something bigger than themselves.

The Daily Dot spoke with 2DTeleidoscope, a fan who assisted in the earliest development of Katawa Shoujo, but left due to internal conflict in the team. The fan, who said he’d prefer to remain anonymous, told us in an email that he thinks the game’s high professional values has set a new standard for fan work.

“The most important thing about Katawa Shoujo is the fact that it even exists,” he said. “From a single obscure sketch in the back of a doujinshi, we now have hours of interaction, totaling hundreds of thousands of words. That kind of ambition is often dreamed of, but rarely achieved–– In the English-speaking otaku community, it’s probably a first.  And there was always a time when the people involved could have simply given up.”

Though our source left the project years back, he said he still has the highest respect for the development team and their accomplishments.

Think of every novel that never gets written, every Internet community that dies in flames.  Realize that Four Leaf Studios endured five years of rewrites, revisions and personal drama to produce this product, shuffling through staff like cards in a game of Old Maid. And yet the idea survived. The work is done. This is great and worthy of our admiration, no matter what you think of romance with disabled girls.

According to the Katawa Shoujo development blog, Four Leaf Studios will not make any other games and will now be disbanding. Their intention, it seems, was never to go pro. Their existence, wrote the developers, was simply to do what they started out to do five years ago on the 4chan forums.

“As a single entity, we will not be producing another game,” they wrote. “But even though our story has ended, you will now be able to experience a new story; the story that Four Leaf Studios existed to create.”